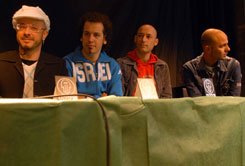 The song warns about the dangers of nuclear war, and the lyrics of the song refer to demonic and crazy rulers, and say that he's gonna blow us up to ... kingdom come. Ahmadinejad's recent anti-Semitic statements have added to fears in Israel that Iran's nuclear program is intended to produce weapons that could be used against that country.

I may have had described it as a "nutty song," but why should it's anti-nuclear war theme be problematic?