A TRUE CONFESSION FROM HAIFA, and the WORDS OF A TORAH-SAGE

A TRUE CONFESSION FROM

The following is a translation of an e-mail that was originally written in Hebrew. I have tried, so far unsuccessfully, to verify its authenticity.** However, the words are true, even if it is not clear who authored them. I have reworked the English translation that I received, and left two phrases in the original Hebrew that appear to have a double-entendre to them, with my explanation of them in English as well.
And interestingly enough, the thoughts in this confession parallel an idea expressed by the Bostoner Rebbe Shlita of Har Nof, Yerushalayim, which I have excerpted below.
They are also echoed in today’s Lazer Beams posting

Bombs are falling upon us and our homes.
Friends and family members are being injured and killed
Some of us are without a roof over our heads.
My business has been closed since the beginning of the battle, and I don't know what will be.
We are wandering around, between family and good people [friends].
Our family life has been severely impaired.
I never thought that I, a resident for 30 years, would be a refugee in my own land.
Everything seems so familiar, from the recent past.

For five years bombs fell upon you – and it didn't touch me.
You buried family and friends – and I was indifferent.
You found yourselves homeless, (kach stam) just like that [or, for no reason at all] –
And there was no one to listen to you.
Even when you came to visit me in my home – to explain, to convince, to share your feelings with me – I refused to listen to you.

It has already been a week that I am out of my house, without my regular routine, it is very difficult for me –
But the empathy, the support, and people identifying with my plight helps me go on.
But you don't even have that.
You – in guest houses, hotels and even in tents – it's not easy to say, but: "Who cares?!"

People from Gush Katif and the Shomron!
Forgive me!
Forgive us for abandoning you.
Forgive us for not understanding you.
I am neither a religious man, nor a mystic,
But we cannot ignore the deep relationship
Between the way I related to you
And the sechar limud* that I am paying now.

*Usually, this word means “tuition”; but it can also be taken to mean, “the price that I am paying for my learning.”

Apologies
Yigal Kirshenzaft, head of the Chabad House in N'vei Dekalim and now in Nitzan, related the following story that occurred this week:
"A woman from one of the moshavim nearby, who considers herself a total secularist, came to our house and said, 'I came to ask forgiveness! Now, in light of everything that's going on, I feel the need to come and ask forgiveness from the expelled residents. I apologize for not having stood with you during your struggle for Gush Katif... How did we not see the truth?' She then left a donation for the Chabad House and left quickly before we could see the tears in her eyes."

In addition, they have the following about the above e-mail from Haifa: 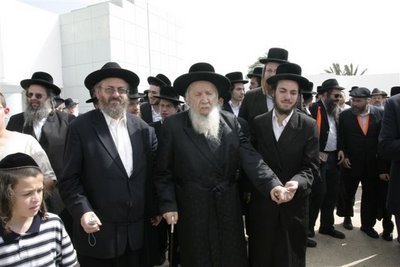 The Bostoner Rebbe on a visit last year to Gush Katif; yitz is on the right with an orange ribbon.

The following is an excerpt from a drasha delivered by the Bostoner Rebbe Shlita in his Beit Medrash in Har Nof, on Shabbat Parshat Pinchas, shortly after the war broke out. The emphasis was added by me.

The ways of Hashem are hidden, unfathomable and it is impossible to truly understand why a righteous man suffers; yet, one must still ask oneself the question “Why?” and seek various reasons and causes for the troubles that afflict oneself and the nation.

Indeed, when the Shevatim [the children of Yaakov, our father] departed from , opened their sacks and discovered the silver, they asked “What is this that Hashem did to us?” This is a paramount lesson that teaches the importance of seeking to discover an answer to, “Why is this happening to us?” – conducting self-examination and examination of actions and pinpointing the realms that must be corrected.

Logically, the entire political and military situation makes little sense. Indeed, forces from all over the world come to learn the esteemed Israeli military tactics, while the Israelis themselves find themselves lost in war. This underscores that everything in the world is from Hashem, and that one must never think, “The strength and power of my own hand is that which brought me this wealth.” Even if one truly believes that any success is not a result of the strength of the nation, one must still be wary of even stating that military feats convey success. Notwithstanding, one must always pray for their success while believing and understanding that only the strength of Hashem’s Hand can lead to victory.

“It is a time of trial for Yaakov.” Even places that, in the past, were never attacked such as Safed [Tzfat] and , have now sustained many casualties and deaths, may Hashem avenge their blood. Obviously, we can never understand the ways of Hashem or His motivations. However, a thought came to mind regarding the portion of the meraglim, the spies sent to scout the . It is written in the pasuk [verse], “V’yad’u es ha’aretz asher me’astem—And they knew the land that you despised.” Mefarshim [Torah commentaries] explicate these words as, “Because they despised the land, all these trials came upon them.”

Exactly one year ago, the inhabitants of Eretz Yisrael despised the land and were willing to sacrifice parts of the country into enemy hands, enemies who did not even wish to own the land. These people felt that it was their choice to decide which parts of the land were theirs to give and to keep. Today, one year later, they see that even those parts that they wished to continue perpetuating and keeping as their own are not secure.