The Tipping Point and 10 Days That Changed History 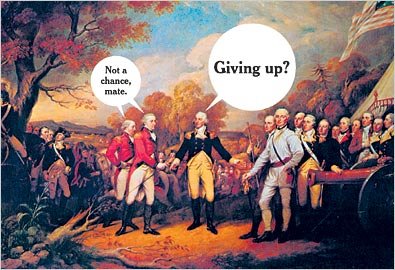 People kept telling me that I must read The Tipping Point by Malcolm Gladwell; so I actually did. Which is surprising, since I generally avoid anything that's too popular or "trendy." I found it disappointing. It's wordy and his point is pretty obvious once you get the hang of what he's trying to say. You don't need a whole book of it.

10 Days That Changed History by ADAM GOODHEART, from The New York Times Week in Review, gives us the same message, but it does it efficiently. He writes of ten events which changed the world. Some were intended, and some accidental.

Did you know that the actual structure of the United States Government and the location of its capital, Washington, D. C. were all decided at a dinner party?
JUNE 20, 1790: Jefferson's Dinner Party
On this evening, Thomas Jefferson invited Alexander Hamilton and James Madison to dinner at his rented house on Maiden Lane in Lower Manhattan. In the course of the night, Jefferson recalled, they brokered one of the great political deals in American history. Under the terms of the arrangement, the national capital would be situated on the Potomac, and the federal government would agree to take on the enormous war debts of the 13 states.
Had that meal never taken place, New York might still be the nation's capital. But even more important, the primacy of the central government might never have been established, says Ron Chernow, the Hamilton biographer. "The assumption of state debts was the most powerful bonding mechanism of the new Union," he says. "Without it, we would have had a far more decentralized federal system."

And if it weren't for a wobbly chair, Franklin D. Roosevelt (FDR) wouldn't have had been president?
FEB. 15, 1933: The Wobbly Chair
It should have been an easy shot: five rounds at 25 feet. But the gunman, Giuseppe Zangara, an anarchist, lost his balance atop a wobbly chair, and instead of hitting President-elect Franklin D. Roosevelt, he fatally wounded the mayor of Chicago, who was shaking hands with F.D.R.
Had Roosevelt been assassinated, his conservative Texas running mate, John Nance Garner, would most likely have come to power. "The New Deal, the move toward internationalism Â— these would never have happened," says Alan Brinkley of Columbia University. "It would have changed the history of the world in the 20th century. I don't think the Kennedy assassination changed things as much as Roosevelt's would have."

How about the mosquitoes deserving credit for the bargain price paid for the Louisiana Territories?"
APRIL 19, 1802: Mosquitos Win the West
Events that change America don't always occur within our borders. Consider the spring of 1802. Napoleon had sent a formidable army under his brother-in-law, General Charles Leclerc, to quell the rebellion of former slaves in Haiti.
On April 19, Leclerc reported to Napoleon that the rainy season had arrived, and his troops were falling ill. By the end of the year, almost the whole French force, including Leclerc himself, were dead of mosquito-borne yellow fever.
When Napoleon realized his reconquest had failed, he abandoned hopes of a New World empire, and decided to sell the Louisiana Territory to the United States.
"Across a huge section of the American heartland, from New Orleans up through Montana, they ought to build statues to Toussaint L'Ouverture and the other heroes of the Haitian Revolution," says Ted Widmer, director of the John Carter Brown Library at Brown University.

And lastly, to remind us how it takes just one person to change the world:
MARCH 2, 1955: Almost a Heroine
When a brave young African-American woman was arrested for refusing to give up her seat on a Montgomery, Ala., bus, local and national civil rights leaders rallied to her cause. Claudette Colvin, 15, seemed poised to become an icon of the struggle against segregation. But then, shortly after her March 2 arrest, she became pregnant. The movement's leaders decided that an unwed teenage mother would not make a suitable symbol, so they pursued a legal case with another volunteer: Rosa Parks.
That switch, says the historian Douglas Brinkley, created a delay that allowed Martin Luther King Jr. to emerge as a leader. He most likely would not have led the bus boycott if it had occurred in the spring instead of the following winter. "He might have ended up as just another Montgomery preacher," Professor Brinkley says.

So we should never give up. One will never know what will tip it all and change the world!
Posted by Batya at July 03, 2006

are you trying to feel important by disproving someone or are do you think you're actually proving a point?

this dude is fuckin dumb