Why Do Otherwise Intelligent Moral People Keep Saying "There Should Be A Palestine?"

As readers here know, I've complained innumerable times about the illogical support of Prime Minister Binyamin Netanyahu for a Palestinian State. Not only does such a thing go against my own logic and reasoning, but the legitimacy of such a state goes against his own.

The call for a Palestinian, sic, State is like some illogical mantra that otherwise intelligent, moral, educated people keep repeating as if it was a magic formula to be accepted by the international media, political leaders and accademia.

The idea that there is a Palestinian sic nation/people is just a few decades old. It's a total fiction/invention to push out a Jewish State from the land labeled "Palestine" on some maps. On other and older maps that piece of land is called Judea, because the only native people to have a history and kingdom there were Jews. Every other ruler here was an invader, an occupier, whether Roman, Persian, Greek, Turkish or British.

And before some of you will start with your "Jordan is Palestine," please don't. Jordan is another of those modern inventions. Great Britain offered the Hashemite tribe from Saudi Arabia a big empty piece of land to call their own and keep out Jews. The British mentored the tribal chief who became the king and subsidized Jordan's economy for decades. A major reason that Jordan is so relatively peaceful is because the government did its best to keep out the so-called Palestinian refugees, sic. Jordan is rather like an Arab Judenrein Canada.

The former Chief Rabbi of Great Britain, Rabbi Jonathan Sacks, recently came out with a fantastic little animated film about the hypocrisy of BDS.

It just has one little flaw. 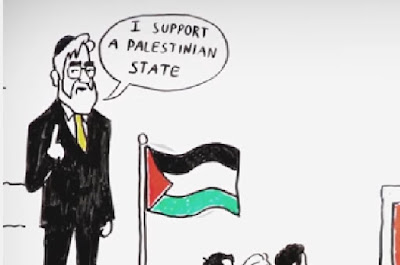 Rabbi Sacks made it clear; he said: "I support a Palestinian State." What a shame. The cartoon would have had been just as effective, if not more so, without the statement. That's especially because he shows exactly what has happened where Israel has gaven the Arabs a chance to rule themselves. 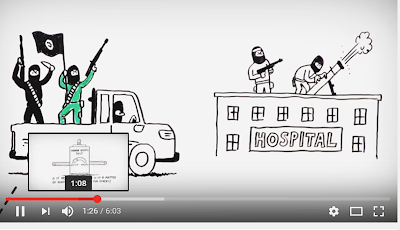 I have to ask you what you mean when you object to "Jordan is Palestine."

Technically, Jordan was formed from 77% of the original Palestine Mandate. If so, then the "Arab Palestinian state" was actually created in 1922. Unfortunately, possibly because the world couldn't come to terms with a Jewish state, the other 23% was subject to partition and only with the Six-Day War was it restored to Jewish control. Since Jordan doesn't allow Jews in its territory, the Jordan River is a natural boundary between Israel and Jordan and if these were the final borders, I have no problem.

Now what do you propose to do with the Arabs in Judea and Samaria who will not acquiesce to the Jewish state? The ones in Israel do acknowledge that they have full citizenship rights (although they are a minority) and are not generally a problem, but this hostile population may be another matter. I am not sure what to do with them. If the areas are annexed, is it possible to recognize that they are not citizens unless they choose to be loyal citizens? Must we give them citizenship? I don't think we can "expel" them, and meanwhile they will be a real problem (not demographically, but it will be a nightmare).

I am no longer sure that there "should" be a Palestine. If they were willing to end the conflict, the conflict could have ended in many different ways. The article in the New York Times by a resident of Judea and Samaria does give a lot of food for thought outside of the two-state and one-state (binational state) ideas. I think that if the land is divided, Jordan probably should be involved. But it's not clear what to do with people who, even if they are in refugee camps, still have lived there and there is no clear idea where they would go in a settlement.

Just like any other minority group, they can be law-abiding citizens, non-citizens with full civil rights or move to wherever. They have absolutely no common history from city to city.Those in Shechem don't want to have anything to do with Gaza etc.
Even Ramalla and Shechem are two different societies. And none of them want Jordan occupying them again either. That 19 year occupation left them under the most primitive conditions. When we came to Shiloh in 1981, the telephones were via the operator in Turmus Aiya, like in the early 20th century. Israel updated and modernized everything. Most Arabs prefer Israeli rule, but can't publicly admit it.

No one has to be "expelled" except for FATAH. They must go, being an Iranian proxy within our land. This would be the most humanitarian event the Arabs would ever experience in their lives.

As for the 65 % of those Arabs who don't want to be here, and don't want to live in a Jewish state, for humanitarian reasons you help them relocate. Working with other host countries, you provide a pocket full of cash and a one way ticket out. The Canadian gov't for example has already stated they will take 5000. They will take many more, don't you worry. With Trudeau being a muslim convert, the gates are open.

The major problem is the political will of the gov't here to solve anything. The "peace" process is a huge money machine and in fact our gov't here is really in bed with the FATAH movement. Its all a sham and sadly, the little folk on both sides suffer incredibly.

You read it correctly. Another globalist puppet. He is far worse than his father and he has a rapidly sinking approval rating. If you have followed his comments like I and many of my friends (I am originally from Canada though a US green card holder for 17 years)have, you would be shocked. I was thinking of heading back to Canada, now, forget it.

If the gov't here does not care about this country and its destiny, why should I? Life is short.

The problem is that if there no Palestine a lot of people are stateless. Jordan does not recognize them as citizens anymore. No other Arab country wants to claim them.

This problem of statelessness (not a pressing problem now - the "state" of "Palestine" is recognized by many Arab states, and its passports are honored) is not the core problem between Israel and the Arabs, but its the BIG problem for the international community.

Note: If the PA in Ramallah was abolished, it would seem then that Hamas in Gaza would have to get the right to issue passports, which they have been prevented from doing.

Or Israel could issue them passports but not grant them the right to vote. This would not be a problem for an absolute monarchy, where nobody votes, but Israel is a democracy, and all citizens (defined as people to whom the state issues passports) must have the right to vote, or you are like the old South Africa.

(The two deleted posts are earlier versions of this, and with typos)

Is there a status of Permanent Resident Non-Citizen given a legally recognized travel document?

I am trying to get an idea of the "best" solution to the problem.

The obvious nonstarters are:

So, would annexing Area C and some sort of settlement involving Areas A and B work? Maybe the "Jordan is Palestine" idea would work if it were clear that the Palestinians were ex-pat citizens of Jordan and Judea and Samaria remained with Israel. This would return the situation to the 23% of the mandate that existed in 1922, and that would probably be a true settlement.

We still have to acknowledge that Jordan exists, even though, like the Palestinians, it is an artificial construct. So the federation idea with Jordan may be possible, if the borders can be agreed to. That probably assumes that the monarchy is dissolved.

I certainly would like to see an acknowledgment of an "exchange of populations" (the expulsion of Jews from Arab countries and resettlement in Israel is balanced by the displacement of Arabs in 1948) and compensation, followed by acknowledgment that the Palestinians should be resettled outside of Israel. I doubt that would be easily agreed to.

I may want to read that New York Times article again. At least someone is proposing some ideas by thinking outside the box.

A- It's not only an issue that they aren't a people and don't give a hoot about anyone out of their clan.
B- They have a culture that worships violence. That's why they celebrate "suicide bombers."
C- If you take North Americans and most Europeans and plop them on a piece of land telling them to govern themselves, they will do a pretty decent job, but it doesn't work with Arabs.

>> Is there a status of Permanent Resident Non-Citizen given a legally recognized travel document?

That's what they would call apartheid.

Although the old south Africa said they were citizens of small Bantustans, which were not recognized by any other country. Except for Lesotho and Swaziland, which are still internationally recognized independent countries today.

Now actually the Gulf States have many non-citizens living there (and also the governments are not vhosen by popular vote) , and Switzerland also has that, too, but

They are citizens of some other state

Stateless refugees can't get jobs there. Theer are pmenty of Syrians, but they cracked down on them because they really can't go back.

>> I am trying to get an idea of the "best" solution to the problem.

The best solution for now is: Do nothing.

Also the "problem" being solved is not what is causing the conflict.


The obvious nonstarters are:

>> So, would annexing Area C and some sort of settlement involving Areas A and B work? Maybe the "Jordan is Palestine" idea would work if it were clear that the Palestinians were ex-pat citizens of Jordan

But Jordan has to agree, and Jordan, under pressure, dropped that claim.

>> We still have to acknowledge that Jordan exists, even though, like the Palestinians, it is an artificial construct.

>> So the federation idea with Jordan may be possible, if the borders can be agreed to. That probably assumes that the monarchy is dissolved.

The onarchy is teh only thing that keeps the thing going.

It didn't work with many Europeans east of the Netherland and south of Scandinavia the Baltic Sea and south of France until after World War II.

Lots of people choose to live here without citizenship. That is not apartheid at all.

I have a question, why are we so worried about what the world thinks based on an invented people. If the whole mantra is a lie, lets just confront the damn lie, expel FATAH and get on with life. Why do we play the eternal victim here?