Yes, I'm serious about that. I know that Purim is a joyous holiday, known for frivolity and crazy behavior including drinking, but the truth is that there's an important message in the Purim story.

No matter how comfortable and "accepted" the Jewish community seems to be in foreign lands or under foreign rule, there is always a danger. There are always those who want to destroy us. Jewish History keeps repeating itself. One Haman goes and another appears.

And in the big picture, the State of Israel, or any Jewish State Kingdom in Ancient History was also always under attack. Invaders take many different paths. Some are military and some use "kindness." The Persian king Achashverosh invited the Jews of his kingdom to feasts celebrating his reign, and American Presidents off the State of Israel "buy in America" shopping coupons aka "aid." The resulting dependence on America has severely affected our sovereignty, independence and self-sufficiency. 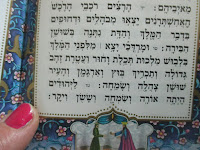 To properly celebrate the Holiday of Purim we are commanded to read the Story of Ester at night and in the morning. If you don't know Hebrew, so follow it in English. Here in Shiloh we hear/read it four times, since we celebrate both days of Purim. So, I've gotten to know it pretty well. I'm always impressed by the simple fact that today, thousands of years after the event occurred, just before the Second Holy Temple was built in Jerusalem, we still follow the instructions told to us in Megillat (Scroll/Story of ) Ester. We tell of what happened, give money to the poor and feast to celebrate the great miracle of the Jewish victory.

You're right. It is a serious occasion. I've been watching a video on the need to destroy Amalek and a rav brought up Haman and stated that there is a spark of Haman in every part of the world. Not sure if the Hamans represent Amalek though.

A strange holiday when one of the lyrics from a video Purim parody featuring Kermit the frog nearly brings tears to my eyes. It was along the lines of fighting Haman for thousands of years and "going a little insane."

Some day we'll blot out the Haman remembrance

These two quotes from book about Jewish history
fit perfectly with what Bayta said in this blog post:

“The Jewish people are optimists, addicted to a passionate belief that they cannot possibly have enemies bent on their destruction.”

In any attempt at defining their specific psyche or “mystique,” we must include that most puzzling and yet most revealing contradiction in the Jewish mentality: the apparent inability of the Jews to understand or predict their own catastrophes. The Jews, whose history consists of one tragedy after another, have yet to be prepared for any one of them.

Clemenceau, who as a young man witnessed the most notorious of anti-Jewish trials, the affair of Alfred Dreyfus, is supposed to have remarked that “only the defendant did not understand” the Jewish implications of the trial. It can be safely said that the only ones who were oblivious to the possibility of their own destruction in 15th-century Spain were the Jews. So they surrendered, died or lost their fortunes, and those who survived were finally expelled from the land of their birth.

This sort of blindness has been true throughout Jewish history. Jews have always been the last to know what everyone else could have predicted. It is as if they simply do not believe it possible. As far as they were concerned, it “happened overnight.” They packed up and left. But nothing really happened “overnight.”

PS: Since the subject of this post is anti-Semitism, it is appropriate to mention my guest-posts about anti-Semitism and Israel-bashing:

Forgotten Anti-Semitism of the Christians:
https://shilohmusings.blogspot.com/2017/03/guest-post-forgotten-anti-semitism.html

Seven Times Stronger
a quick quote about American anti-Semitism during the Holocaust:
https://shilohmusings.blogspot.com/2017/01/guest-post-seven-times-stronger.html

Yes Mr. Cohen, though Jews seem to not have an ability to see what is coming, God does in fact send emissaries, ie: Neviim. As it does state in Kohelet, what is to come has already been. I might suggest that we are reliving the same period as right before the destruction of the 2nd Temple. I hope we do not make that same error that eventually led up to the destruction of the Temple and murder of thousands of Jews. Sadly if we base it on how well we listen to the emissaries and how well we learn from past history, our future seems dim. Lets hope we reverse this destructive behavior and create our destiny like we are supposed to be doing. Purim Sameach