Time Bomb, Anti-semitism getting Worse All Over

I don't think I'm exaggerating when I say that things are getting much worse for Jewish People all over the world. I know that many will argue with me, but I consider the acceptance and teaching/brainwashing of anti-Israel policy and false history in international academia as proof of my thesis.


The future can very well be worse than a combination of the Holocaust, Inquisition and Crusader times.

Jewish People must all make aliyah, because in the long run, Israel will be the only place we can thrive and be safe.

Here we are Rosh Chodesh Nisan, less than two weeks before Passover Holiday is to begin. We're not supposed to think of Passover as cleaning and feasting, because it's a much more important Holiday than just that.

Historically, according to the Bible, it begins when ten brothers gang up against their younger, favored brother and sell/banish him. He ends up in a foreign country where he reaches a position of authority and leadership.

Later Gd orchestrates a situation in which his entire family voluntarily exiles itself and joins him. They enter that foreign land as honored guests/immigrants being given the best land to cultivate and settle, but then everything changes. They find themselves dependent, enslaved by the ruler who has rewritten history to wipe out the good deeds of the brother. And for quite a while, just like the joke with the punchline, "we have three days to learn how to live underwater*," the Jewish People tried keeping quiet and cooperating. Yes, that sounds like Jews in Germany during the early stages of the Nazi regime.

Gd waited until the Jewish People finally cried out to Him, and that's when He sent a leader to help them escape.


Unfortunately at this point, the wrong people are being blamed. There's an outrageously absurd situation when modern Hellenists aka J-Street and Company are supporting our enemies and attacking those who are trying to help us. For those who know Jewish History, this is all so sadly deja vu. Remember the anti-Zionists of Europe as the Nazis began their ascent to power?

Now all of Diaspora Jewry is in danger.

COME HOME TO THE LAND OF ISRAEL,
THE STATE OF ISRAEL!! 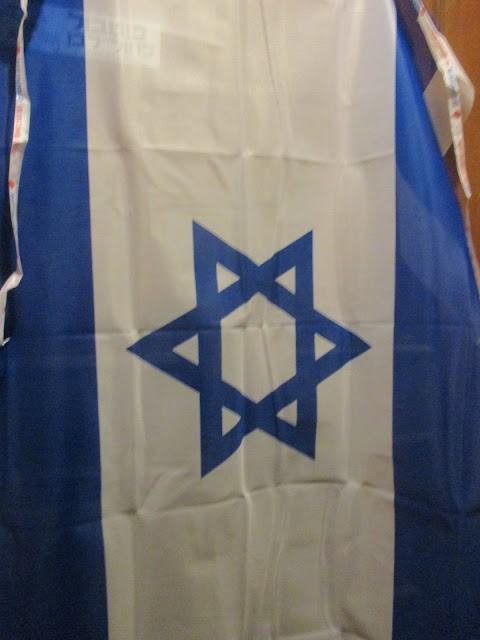 * (#1781) The three advisors [My thanks to John T for the following] As a result of global warming, a new flood is being predicted by all the world’s top scientists. They predict that it will be horrendous, wiping out maybe 70% of the world’s population. Not only that, but the Flood could be here in 3 to 4 days time. Oy vay iz meer! Many famous people start to appear on television giving advice. One such program has the Pope, the Dalai Lama and the Chief Rabbi appearing together. The Pope says, "It’s still not too late to accept Jesus as your Saviour." The Dalai Lama says something similar, "I appeal to all of humanity to follow Buddhist teachings. If you do, you can find nirvana in the wake of the disaster." But the Chief Rabbi has a totally different kind of message. He looks straight at the camera and says, "My people, we have just two or three days to learn how to live under water!"

Anti-Semitism ** IS ** getting worse all over.

Every year, Leftist-Jewish philanthropists spend millions of dollars to increase literacy among Arabs and to increase Arab employment in Israel’s high-technology industry.

When I attempt to protest this by making comments on the Leftist-Jewish philanthropy blog, my comments are always deleted by the moderator, who is not interested in tolerating people who disagree with Jews giving millions of dollars to help Arabs. No matter how respectfully or diplomatically I phrase my protests, they are always deleted.

The Leftist-Jewish philanthropists are also NOT INTERESTED IN HEARING people who disagree with: gay marriage, intermarriage between Jews and Gentiles, and church choirs singing in synagogues.

PS: Please read my guest-posts on this blog about spiritual matters:

I'm in Israel.
My blog is my weapon of choice.

I do not think blind combat.

There are forces that have

Insdiious Fasonic and Occultist forces that. The tradition of "Jewish" pagaism, and the involment of the boodlines in the west.
Has never had an inquisition. Not be in, but not predicting the need for one is what has gotten into this deadly mess.
To Ms.
As for SOAS and other asonic Atlancist devilrty, the best thing is to throw them out.

Many people in other parts of the world and have been trying to detach themselves from this current Dominatinist paradigm, as it is, to distance themselves 9the sole excetions being the Atlanticist Gulf Arab nations. isreal pehaps has suffered more form it th
The Shanghai Cooperation Organization. Most humans have.
not so for us. Have allowed a false "Maluth" (I misspelled), or home-imulse to take place in exile, tha. This a fault, but it is natural (THings at rest prefer to stay at rest unless distrubed by an outside force. This works with the biomachine as well...centuries of having to assimilate to . The occultism of the Western lodges theorized that Am israel was simply a rogue offshoot of their astronaut fals-gods and that to assimilating. Hence the rabid op. Those very lodges have gone on operating to this very day, and they and their students still hold to such antiZionist views, that the

THere is a very
The Grand Orient System of
https://ixquick-proxy.com/do/spg/proxy?rurl=https%3A%2F%2Farchive.org%2Fdetails%2FGrandOrientFreemasonryUnmasked&udata=6f6345aa696fa82049ba290e5c835d7c
Because of their "outwardly" liberal beliefs, they had thoguhs


Europe has had a history of promoting the Nephilimistc aganis on other peoples 9they did not ursh the liberal-lodges). At the root of this is sexuality. The Xtian Church was never able to crush paganism because of its own roots from within the Ancient Myster Chools. The "Monotheism" of both Late and Early Christian cruches was thus an experiment cooked up by very human

What they are doing in syria they plan eventually to do to israel.
We cannot trust the . Hard efforts to keep independent from wwestern blocs until they can get their affairs in ordr.