As I posted yesterday, this week I attended Matan's Pre-Passover Yom Iyyun, Education Day. I don't know whom I heard mentioning something very significant which resonates greatly. During those three fascinating and inspiring lectures, not once did anyone mention:

Just a few years ago, and maybe still at some venues, these so-called "women's topics" may still get some play. But today's modern, educated Torah Observant woman looks for spiritual and theological inspiration before Passover, not more recipes and cleaning advice. And the inspiration we crave isn't the "predigested" kind, it's intellectual based on the Bible and traditional Jewish commentators. We are expected to think, and not about color schemes and table-settings. 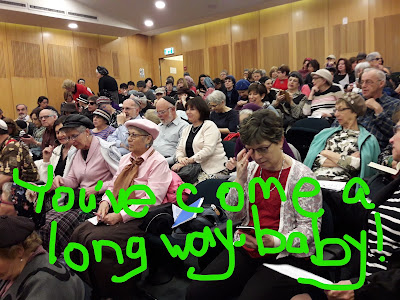 And the overcrowded Matan auditorium also had quite a few men sitting in the audience, as you can see.

Another thing is that there were items for sale just outside the auditorium, but they weren't jewelry, tablecloths, scarves or hats. They were a large selection of books from Pomeranz Books for added inspiration and inclusion at the Passover Seder. I bought my grandkids the "Harry Potter" Haggadah, which was one of the big sellers, as many participants had the same idea I did. I didn't notice any cookbooks, but then, again, I'm not in the market for any. Today I spoke to Pomeranz who said that besides The Hogwarts Haggadah, the big sellers were Passover books by Erica Brown and Rabbi David Fohrman.

To receive quick quotes from a variety of
classic Jewish Torah books, please go to:

For Jewish people ONLY! Thank you!

Once again, the Jew-hating New York Times has expressed its relentless bias against everything which is authentically Jewish, including Orthodox Judaism, which it has attacked many times before, in addition to its relentless attacks against Israel:

How to Convict the New York Times of Unfair Bias Against Israel:
https://shilohmusings.blogspot.com/2016/11/guest-post-how-to-convict-new-york-times.html

The worst part of their relentless bias against everything which is authentically Jewish, is that millions of stupid ignorant disloyal Liberal Jews continue to buy it 365 days a year, and consider it to be their Tanach [Bible], even more than the actual Tanach.

Do you expect anything else from the NY Times?
Also the becoming religious books aren't as interesting.