Isn't All Apartheid the Same Evil?

My plan was to write a nice little blog post welcoming the people of Amona to the Shiloh Bloc of "settlements," Jewish communities, but then I read a few lines in the Jerusalem Post and began to seethe.


Palestinians also took issue with Israel’s decision to publish tenders for close to 2,000 new settler homes in the settlement blocs and to classify as state lands 977 dunams near the isolated settlement of Eli and the Palestinian city of Nablus.

Yes, another inaccurate statement from the Jerusalem Post. Or maybe it should go back to its original name, The Palestine Post...

From my vantage point in Shiloh, the description "the isolated settlement of Eli" is ridiculous. Eli isn't isolated. 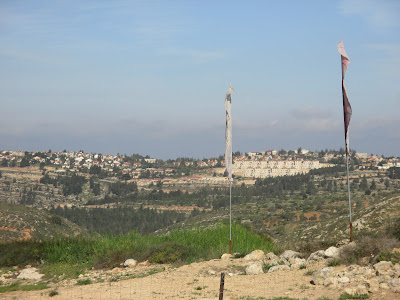 It's just north of Shiloh, and it's actually walking distance from us. I've walked it. Eli is the largest and most populous community in the Shiloh Bloc. Besides being just a couple of minutes from Shiloh and a number of much smaller communities, it's barely a ten minute drive to Ariel and Tapuach. I wouldn't call that "isolated."

OK, I know what is really bothering everyone.

The Arabs and the proponents of the "two state solution," sic promote apartheid, which is why they don't want us here. And I don't understand why nobody is pointing this out.  Ahh, yes, the truth is that all those faux  moralists, the hypocritical so-called liberal democrats all are promoting this anti-Jewish apartheid.

They want all the land here to go to Arabs, and they don't want Jews here. That's called APARTHEID!
Posted by Batya at 11:48:00 PM

When I was a teenager, I believed that news reporters [also known as journalist] were great people. I wrote articles for my college newspaper, even though nobody paid me, because I thought that was an important thing to do, at that time.

Wow! Was I stupid!

No longer do I have a high opinion of newspapers or the reporters who write for them. They often write articles about subjects that they do not understand, and they are so far from unbiased that there is little reason to listen to them, or even worse, trust them.

All of these blog posts contain information that most newspapers
refuse to print and/or DO NOT WANT YOU TO KNOW: