Pirkei Avot, Ethics of the Fathers Chapter 1 in Macro 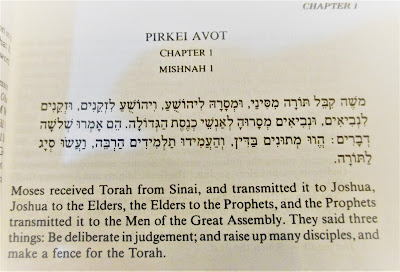 Pirkei Avot, generally translated as Ethics of the Fathers begins with:

That's to show or remind us that Jewish Law is derived from Gd and has been passed on from generation to generation of Jews.

Yes, that's the message to the Jewish People.  But what about individuals, especially those who have returned to Torah Judaism after a generation or more of our family didn't observer mitzvot? Or what about the convert who has no family customs/memories to follow?

In my family I was considered a "rebel" when I became Torah observant, since my parents, and even some of my grandparents had thrown off the "yoke" of Torah. I didn't grow up with any strong religious memories or family customs. And sometimes I feel the alack.

The other day I was with a couple of friends. Besides me, there was a convert and one from a long unbroken line of Torah observant Jews. The convert and I spoke about things we had asked rabbis, while the one from the unbroken line admitted that she never had.

And I replied that many of the questions we asked the rabbi were simple halachik, Jewish Law questions, because for those of us who have no family customs to go by and no family to ask, it makes more sense to ask the rabbi.

Sometimes when you look for the answer yourself, you get more confused or end up getting it all wrong.

This reminds me of a game we played as kids. We'd pass around a "message." The first one would whisper something in the ear of the next child, who would whisper to the next, on and on, and the last one had to say it outloud. Most frequently, the message would be so garbled it bore no resemblance to the original.

In Judaism, that's why we still have copies of the Torah text and learn it all and the Mishna and Talmud on a regular basis. It's just too easy to get off track and distort things. And there's the tradition to learn Pirkei Avot every year after Passover. And Pirkei Avot reminds us that there's an unbroken chain from Moshe who heard from Gd when he and the Jewish People were on their way to the Holy Land after escaping slavery to Pharaoh in Egypt.
Posted by Batya at 10:29:00 PM

Email ThisBlogThis!Share to TwitterShare to FacebookShare to Pinterest
Labels: Ethics of the Fathers, Pirkei Avot

Since you are a Baal Teshuvah (me too),
you may be interested in reading this:

The web link I just mentioned is my
most-popular blog post, with over 700 hits
since it was posted around 9 month ago.

Thanks for posting it.

Politics: Sometimes You Have to Hold Your Nose...

I had a talk with a neighbor at the makolet* last night about it**. We both felt that in the world of politics/compromise/deals, Otzma is...