The REAL REASON Jerusalem Arabs are Opting for Israeli Citizenship

There's a very simple reason that Jerusalem Arabs, and other Arabs who legally can, are opting to take advantage of their right for Israeli Citizenship.


The PA-Palestinian Authority and Hamas-ruled Gaza are horrendously corrupt and cruel.

Of course, their lives are in danger if they give that reason. For close to six years I worked with Arabs in Yafiz, Sha'ar Binyamin. We had many Arab customers, and there are always Arab workers in Yafiz and Rami Levy. 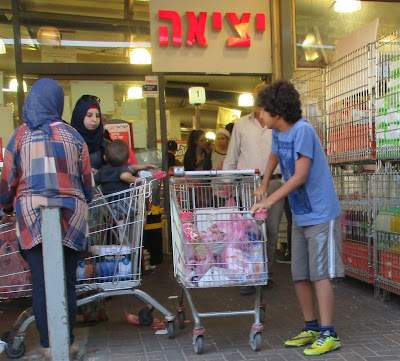 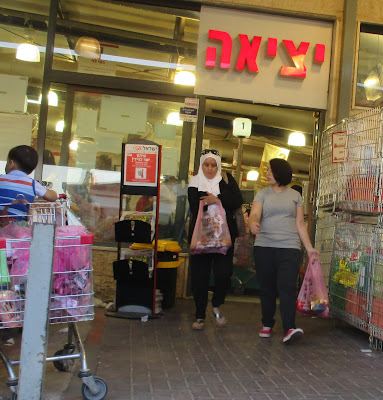 The Arab customers and I would communicate in Hebrew, English and pantomime. I even learned a few words in Arabic, like nus, which means half, so I could tell them that we had a "half-price sale."

In the early years I worked there, we'd have a lot of Arab customers, especially those who had lived abroad and/or worked for some of the NGOs. For them, shopping in the "Israeli island/oasis" of Sha'ar Binyamin was "like being in America." That's what they would tell me.

It also used to be common for vans loaded with Jordanian (and other Arab) tourists to arrive in Sha'ar Binyamin for "shopping tours," like what you see in American "outlet shopping centers/malls." Arab businessmen would tell me that they were buying for their wives and children, "because you have better children's clothes than in Dubai/Kuwait."

But the last couple of years I worked in Yafiz, there were far fewer Arab customers. We were told that the PA-Palestinian Authority had been enforcing a boycott of Israeli stores. There were even roadblocks by PA Policemen who would confiscate whatever they found in Rami Levy or Yafiz bags.

Another reason that Arabs prefer Israeli citizenship is the health and social benefits Israelis get. The Israeli minimum wage is considered an excellent salary for those Arabs not "on the take." And Israeli medical care is among the best in the world. The healthcare system is also superior and less expensive than you have in most of the world.

And of course, as Israeli citizens, Arabs can live in Israel and not be dependent on the whims of the corrupt and cruel Fatah and Hamas.
Posted by Batya at March 23, 2017

israel belongs the the jews ONLY .... having them there DEFILES the land

The only way to handle this is to be a sovereign nation. Annex the land and expel PLO/FATAH. This will be the greatest humanitarian move ever for the Arabs. Needless to say, end this charade of the fake nation. Permanent residency for those who want to live and build a great country. Humanitarian help to relocate for those who don't want to live in a Jewish state. Many countries like Canada are willing to immediately help. Now since the western world is destroying itself with refugee's, what a wonderful opportunity to send people with money, legally instead. The People of the Book need to think outside the box.

Why should Arabs be given the option of living in Israel when this violates the laws of the Torah?

Why should Arabs be given the option of living in Israel when Jews do not have the option to live in Arab lands?

Why should Arabs be given the option of living in Israel when Jews are being driven out of France [and other places in Europe] by Arabs?

Why should Arabs be given the option of living in Israel when Arabs continue to commit acts of terrorism against Jews?

Why should Arabs be given the option of living in Israel when Arabs continue to believe in a religion which teaches that Jews are evil [Islam]?

Some of my guest-posts on this blog are relevant to this topic:

Mr Cohen, is this what Aish teaches, total hatred towards a group? Isn't that what you hate when the goyim throw their slurs against us based on a few?

Being I was raised around Arabs, I am not blind to what some of them are and what many are not. I would sooner see decent humans living in the land rather than arrogant and nasty members of the club that are a complete disgrace to fellow humans and God! Laws of God do not exclude Arabs from living in the land, just a corrupted law of the rabbi's.

Who cares if we can live in another Arab country or not. Worry about us living here with decent behavior towards fellow humans and not use those same Arabs to build your house with less money. I know your club very well actually.

The European problem is not with "Arabs". It is with Muslims, yes, afraid to go after the real cause because its not PC.

All Arabs are not committing acts of terror certainly need to be taken care of but it is because of our inaction that is the cause. The Arabs despise weakness, 2200 years of weakness to be more specific.

Excuse me, shall we take the beam out of your own eye. Did you forget the passages of hate towards the goyim in our own writings? Religion is the cause of their hatred without a doubt. This religion needs to be removed from the land.

If ever we annex the land, give the Arabs who want to live a decent life under Israeli law the right to do so as permanent residents. The hatred you have will be used measure for measure against you. We will never be able to do that until our people clean up their acts of behavior towards its fellow. God does not care if we follow and are subservient to rabbi's, but if we are decent humans doing the will of God. Sad we cannot see the forest for the trees here.

Exactly. Although Arab culture as a whole has problems, individual Arabs know exactly on which side their bread is buttered, and it's on the Israeli side.

yes, but not too many, they tend to invade aggressively. Last thing needed is looking like France or Belgie.

Yes, those are all points, but not the exact topic.

A curse upon you, anon.
You reveal your Theomachist Atlanticism right off bat. maybe he is writing from Nephilimstans such as MeriGoG or Eurabia.
Eurabia has always been the strategy of the G-d hating Atlanticist think tnaks and bloodlines. So many human beings have already sacrifiece their lives to reveal the truth abot the NWO to us. There should be no rational reason to, unless you beleive in the such as SOAS, the FOGC, and other monidallist forces

You have no right to declare such evil.

Go "butter" an Arab with your own hands, Erev Rav ,and leave the rest of s out of it.