War of Words Must Be Fought, Too

I'm glad and relieved to see that the Israeli Government is paying attention to the non-military attacks on Israel.

It's about time, better late than never, for sure.

Unfortunately, even close to seventy 70 years after the establishment of the State of Israel, which had davka been approved by a majority of the members of the United Nations on November 29, 1947, there is a large international movement questioning and attacking our legitimacy. Their weapons may be "words," but those words bring financial resources to Arab terrorists who kill, maim and terrorize innocent Jews.

It is now a full twenty-one 21 years since I was injured in a terror attack while waiting for a bus (or ride-depending on which would come first) in Jerusalem. Yes, I, too, among many Israelis and visitors, am a victim of Arab terror.

Today there is a very "sophisticated" war being waged against Israel by so-called "humanitarian" groups which incredibly see the humanity in terrorists, but look at Israelis like myself as terrible monsters. Their perversion of morality, history and facts is very dangerous.

Many, attacks, demonstrations, boycotts and riots are instigated and supported by foreigners who come to "help" the Arabs. Israel is safer to keep them out. Their ultimate aim is the destruction of the State of Israel and replacing it with a judenrein "Palestine," Gd forbid! 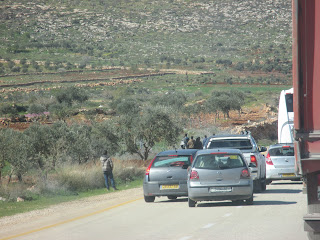 Experience teaches us Israelis to always be on the alert. Since, we know that a terror attack can come at anytime and anyplace, my fellow teacher and myself became terribly nervous when we saw all of these cars stopped and Arabs on the side of the road. I quickly checked news sites on my smartphone to see if there had been an attack, Gd forbid. But nothing could be found. Within a few minutes, security forces arrived and the Arabs ran back into their cars and traffic moved as if nothing had happened. Maybe nothing had happened...

THANK G_D [literally] for this long-overdue step in the correct direction!

Since the topic of this post is the war-of-words against Israel,
please allow me to mention some practical advice about how to
fight that war: