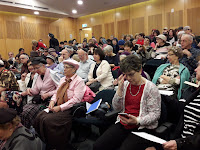 Yesterday, I was one of the hundreds of women and men who overfilled the Matan Auditorium to hear three of Matan's best teachers, Dr. Yael Ziegler, Rabbanit Shani Taragin and Yael Leibowitz. I thank Gd for the opportunity to have been there, which was due to the fact that in my present job teaching EFL Remedial English in Yeshivat Ahavat Chaim, my Passover break has already begun. 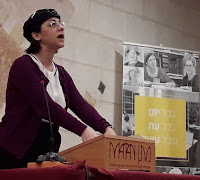 As  every Wednesday morning in Matan, Jerusalem, for many years, Dr. Yael Ziegler opened the day with a totally spellbinding and inspiring lecture. Not one person interrupted, and Yael hardly took a breath as she enlightened us about the Plague of Darkness and its significance for the Egyptians and Gd's promise to the Jewish People. 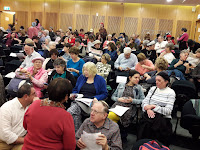 After a short break, Rabbanit Shani Taragin told us about Prayer, Passover and the Mitzvah to retell what happened to the Jewish People in Egypt. She quoted Rav Soloveitchik who had taught that those who don't recognize their own power of speech/prayer are slaves. 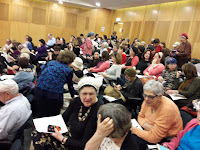 Lastly, Yael Leibowitz managed to keep us totally enthralled with her fascinating talk about the beginnings of the Jewish Nation including comparisons between Moses and Jacob.

My friends and I walked out totally energized and inspired, even though we had been sitting and listening for over four hours.

These pre-holiday learning sessions and the regular courses in Matan can be heard on their Matan Online site. Some are free, and others require payment. But once you subscribe, you can access all of the lectures. So, even if you can't attend Matan in person, you can still enjoy its classes. When I take my fitness walks, I listen to the lectures. Even those I had heard in person never bore me when I listen to them a number of times.

Have a wonderful Shabbat, which should energize you for Passover, which is barely a week and a half away.
Posted by Batya at March 30, 2017

A thoroughly inspiring morning!
The true preparation for Pesach!

Since Mr. Shiloh asked for derech eretz
yesterday, I will repeat it today, just-in-case
he did not see it yesterday:

Batya, it is good to hear that Jews in Eretz HaKodesh are feeling inspired by Torah lectures. Keep up the good work.

PS: Please read my guest-posts on this blog about various topics:

How to Convict the New York Times of Unfair Bias Against Israel:
https://shilohmusings.blogspot.com/2016/11/guest-post-how-to-convict-new-york-times.html

Yes, Risa, must prepare the soul no less than the kitchen.