One of the things I've said about Barack Hussein Obama as early as his campaign for the United States Presidency is the fact that he had no real political experience. I consider politics to be a skill and a talent. Some people have an easy knack for getting along with people and manipulating them to do things in a way that the people even believe they're doing what they want to do.

Ever since Obama has been in the public eye he has shown none of these necessary talents and skills. He'll chastise, browbeat and get just plain nasty. He doesn't have an easy and natural way with people. He can put on short acts but can't sustain them. As United States President, Obama has been a disappointment even to many who supported him, and he hasn't seemed to grow in stature, public respect at all.

Obama's nemesis seems to be Binyamin Netanyahu, Israel's Prime Minister. I certainly have my complaints about Bibi Netanyahu, but the truth is that he is everything Obama wishes he could be. Netanyahu's a true intellectual, amazingly knowledgeable, a well-respected former soldier in a world renowned special unit,an expert in international terrorism, and he's a master political manipulator.

The Israeli political system requires a Prime Minister who can not only negotiate with other parties for form a working coalition but to keep them in line. Obama, as a "lame duck" president has even less control over congress than ever before. The American system stresses a separation of powers, and Obama is rather isolated in the White House. That's one of the reasons that House Speaker John Boehner invited Netanyahu to come to Washington and address Congress about Iranian nuclear development. Many Americans consider Bibi a lot more knowledgeable about the issue than their own government. This has Obama and staff livid.

“He spat in our face publicly and that's no way to behave. Netanyahu ought to remember that President Obama has a year and a half left to his presidency, and that there will be a price."
The anonymous quote was a throwback to when, last year, Atlantic magazine quoted another unnamed senior administration official calling Netanyahu a “chickenshit.” (Fox News)

It's a sign that Obama is not in control of the American Government. 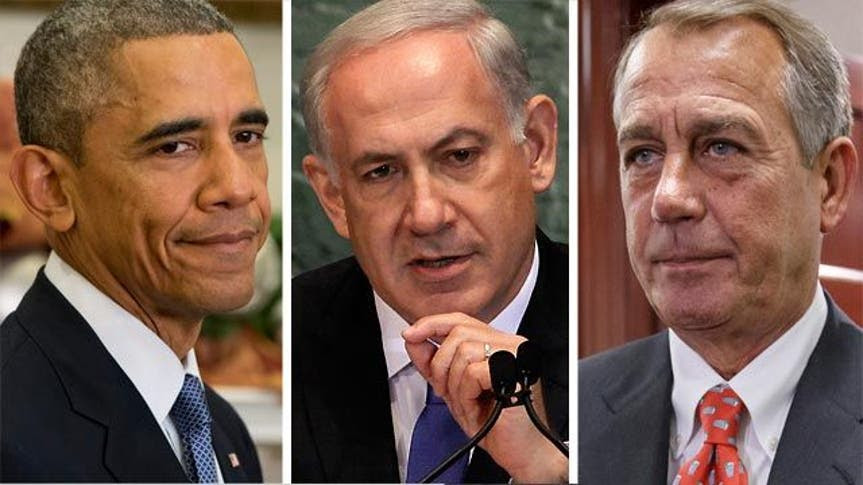 Congress is not playing ball with the White House. That is Obama's problem; it's not Bibi's fault. Being President of the Unites States of America is a lot more complicated than Obama's supporters bargained for. It seems that being an effective president is harder than getting elected, at least for Barack Hussein Obama.
Posted by Batya at 7:55:00 PM

Good Shabbos/Shabbat Shalom Batya.Your husband may (or probably will) disagree with me about this, but I assume that this business of inviting Netanyahyu to address a joint session of Congress is just another ploy in the mutually antagonistic battle between John Boehner and Pres. Obama. This invitation is Boehner's answer to the President's State of the Union speech. It's usual for the opposition party to answer the President's State of the Union address to Congress, but in addition, Boehner has poked the President in his ribs with this stunt. It's intended, and has succeeded, as shear antagonism, and probably deservedly so.

Shavua Tov
This isn't my husband's blog, so what he may or not think is irrelevant.

As I wrote, Obama's problem is that he is not in control of things in the government.