Of all the slogans ever put out by Israel's pro-Jewish Rights in All of The Land of Israel aka "the Right," my favorite has always been: 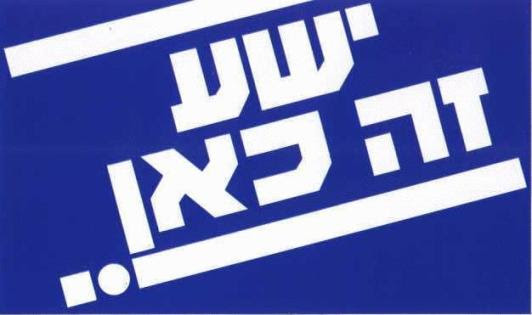 Absolutely nothing summarizes the situation better than that simple statement. There is no real difference between Tel Aviv and Tel Zion, Gush Etzion or Gush Dan, Ma'ale Gilboa or Ma'ale Levona, Eli or Eilat. If anything we Jews have a richer, more extensive and easier to prove ties to YESHA than to Tel Aviv or Eilat or any of the other places the Israeli Left (and today's Center) take for granted the Arab enemy will allow to remain in the State of Israel after negotiations for the establishment of a State of Palestine sic.

At least ten Israeli settlers were stabbed Wednesday
morning on a Dan Line 40 bus on Begin Road in Tel Aviv near the Maariv
Bridge. (emphasis mine)

Leftist Israelis (and others) who live in pre-June, 1967 Israel try to distinguish between themselves and those of us who live in Land liberated in the 1967 Six Days War. They totally ignore the frequently proven fact that our Arab enemies make no distinctions, none at all. For them we are all the same. They aim to destroy the entire State of Israel. We can have no peace with them.

Shalom!
I remember that campaign. The message still hasn't sunk in yet.

best slogan ever
I just don't get the worship of the 1949 armistice lines that lasted barely 18 years. We're a people thousands of years old with a well documented history. That should have been just a footnote in history and they are so ocd about it.

Maybe H' is just showing those on the left coast that the soneh doesn't differentiate - all Jews are the same to them. Of late, they've gotten a few wakeup calls. The goal of the Arabs is to rid Israel of all its Jews. Do the leftists really believe that they would be immune? Never understood that they can be so foolish and/or blind.

The Arabs are being honest about their plans. The problem is that the Left keeps trying to ignore it, because admitting they have been wrong about that pokes a big hole in their entire way of looking at the world, which has them scared.