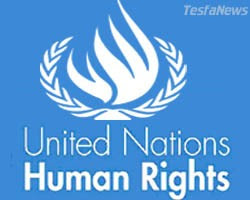 In a rare move, the Israeli Government has refused a visa to a United Nations investigator. But davka UNHRC special rapporteur on violence against women, Rashida Manjoohad, planned on investigating the status of women in the P.A, though knowing the United Nations and the Arabs, there's little doubt they'd find some way to blame Israel.


Foreign Ministry spokesman Paul Hirschson said on Monday that the issue was the language of the request and the travel itinerary, which did not include a visit to Israel.“The special investigator asked to visit ‘Palestine.’ We explained to her that there is no such country. Should she wish to visit the Palestinian Authority as part of a visit to Israel, that would be no problem.Israel has an excellent record of working with UN special investigators,” he said.

For most of the world, there is a country called Palestine, and it's just an immoral minor detail that it is "occupied" by Israel which restricts access. Most of the world fully believes that there had been an Arab country called Palestine here before the establishment of the State of Israel. Of course they ignore the simple fact that they can't find any record of such a country, its leaders, history etc. Why should they need such historical facts when it comes to delegitimatizing the Jewish state? The "blood libel" is alive and thriving even in the twenty-first century.

This reminds me of a Morty Dolinsky story from the time he was head of the Government Press Office:


When the late Morty Dolinsky was in charge of the Government Press Office in the 1980s, he once famously replied to a reporter, who asked for information about the West Bank, that he knew no West Bank as he banked at Leumi.

I sincerely hope that the Government of Israel doesn't apologize to the U. N. for refusing Rashida Manjoohad a visa. And we should stop giving visas to all the NGO activists, investigators etc who just incite the Arabs against Israel! They should be declared persona non grata and expelled!
Posted by Batya at 3:01:00 PM