Charlie Hebdo Shooting- The World Doesn't Get It! Arab-Muslim Terrorism All The Same!

The reactions to the murderous shooting attack on the Charlie Hebdo editorial staff have been, at least on the surface, on target. 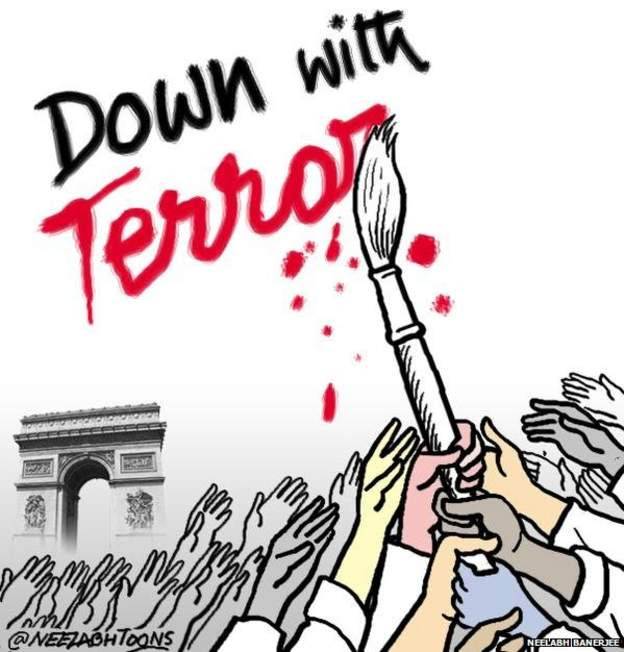 At about 11 a.m. on Wednesday, gunmen in black ski masks with Kalashnikov weapons stormed the offices of the newspaper Charlie Hebdo and opened fire on an editorial meeting before fleeing in one car and then hijacking and escaping in another. By the time it was over, at least 12 people were killed and another 11 injured—four critically—in the deadliest terror attack in France in recent memory. Among the dead was editor Stéphane Charbonnier, known by his pen name Charb, the revered iconoclast cartoonist who had long defended his staff’s right to free speech. (TIME)

The media has been full of moving, well-crafted reactions by international leaders, which purport to understand the seriousness of the attack.


Kerry: Slain French Cartoonists are 'Martyrs for Liberty'January 7, 2015 Masked gunmen have killed 12 people at the offices of a French satirical newspaper in Paris Wednesday morning......"Each and every American stands with you today not just in horror or in anger or in outrage for this vicious act of violence, but we stand with you in solidarity and in commitment both to the cause of confronting extremism and in the cause which the extremists fear so much and which has always united our two countries—freedom," Kerry said in his statement, which he repeated in French...
...and United States President Obama:I strongly condemn the horrific shooting at the offices of Charlie Hebdo magazine in Paris that has reportedly killed 12 people. Our thoughts and prayers are with the victims of this terrorist attack and the people of France at this difficult time. France is America's oldest ally, and has stood shoulder to shoulder with the United States in the fight against terrorists who threaten our shared security and the world. Time and again, the French people have stood up for the universal values that generations of our people have defended. France, and the great city of Paris where this outrageous attack took place, offer the world a timeless example that will endure well beyond the hateful vision of these killers. We are in touch with French officials and I have directed my Administration to provide any assistance needed to help bring these terrorists to justice.

They see it rightly as against "freedom," but that's not the whole story. The truth is that nobody sees the big picture.


The truth is that the Muslim Arab terrorists who attacked and murdered most of the Charlie Hebdo editorial staff are part of the same Muslim Arab terrorists who have been attacking Jews here in Israel. If you condemn one of their dangerous arms you must condemn them all as the same! Otherwise they will just continue and widen their murderous range.
Posted by Batya at 8:32:00 AM