I don't understand why it's taking the Israeli Judicial system so long to decide that Hanin Zoabi is a traitor. Unfortunately, the charges they are thinking about aren't strong enough.


The Northern District Attorney's Office on Tuesday told lawyers representing Arab MK Hanin Zoabi, that Attorney General Yehuda Weinstein is considering placing her on trial, pending a hearing, on charges of incitement to violence and insulting a public official.
Weinstein’s decision comes following the recommendation of State Attorney Shai Nitzan, and after Weinstein held consultations on the issue.

I consider Zoabi and her ilk to be traitors and they shouldn't be allowed to serve in the Knesset. It's totally hypocritical of the Israeli Judicial to have banned Rabbi Meir Kahane's Kach and allow the Arabs to spout anti-Israel propaganda while getting salaries of Knesset Members. I was never a fan of Kahane or a member of his Kach or JDL, but he and his followers are loyal patriotic Jews and Israelis. Zoabi calls for a foreign Arab terror state in the Land of Israel! She supports terror against Jews! 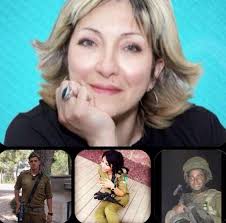 For those who think that Zoabi is the typical Arab, it's heartwarming to listen to Anett Haskia tell her story:


Haskia is the Arab Muslim woman who educated her children as proud Israelis. They serve in the IDF, and she is running in the NRP aka Bayit Yehudi primaries. I'd like to see her debate Zoabi, if Zoabi isn't jailed first!
Posted by Batya at January 07, 2015

Annet is available to speak at parlor meeting so that people can speak with her face to face and understand who she is and why she is running. I can put you in touch with her anglo PR liaison if you want more info. mheiiczer@gmail.com

May Zoabi rot in hell. And may Anett be blessed with Hashem's protection for I fear for her life. There are too many fundamentalists out there who would love to kill her. She is a determined and brave woman who I am proud to have as my countrywoman! Thank you Batya for posting that moving film about her!

Thanks, G-d willing there will be more like Anett.