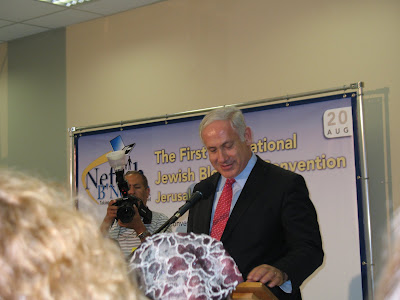 But the polls say that if Israelis had the choice, Bibi would win hands down.

I'm not enough of an expert in international political science to say that there is no political system or form of government like the Israeli one. There may be other countries with similar systems. I think that in principle, Great Britain has it, but over the years they have developed a pretty strong two-party system. Their population isn't as varied or fractured as ours is.

In Israel the various "sectors" which insist on their own parties, do it primarily for economic reasons. There are various parallel school systems that need government funding, and the parties that support these systems make it clear to the parents that only by voting for the correct party will ensure the fiscal viability of the schools. And that's why the NRP (now known as Bayit Yehudi, Jewish Home) cannot run with the more religious aka chareidi parties. They have competing school systems. The same is for Shas, that also has educational institutions to support. The Left supports other sectors, but less than in the earlier years of the state.

The parties run lists of candidates for the Knesset. There are 120 seats. That's the legislature. The top person in the party that succeeds in crafting a coalition, since no party will get 61+ seats, becomes the Prime Minister.

I think it's an easy guess to say that the fact that the overwhelming largest percentage of Israelis want Binyamin Netanyahu as Prime Minister will be the theme of the Likud campaign. It makes sense.
Posted by Batya at 4:33:00 PM