When I first heard that one of the "New Parties on the Block" to run in Israeli Knesset Elections is of Chareidi women, בזכותן Bizchutan, all I could think was "oxymoron." There's an inherent impossibility in the term. 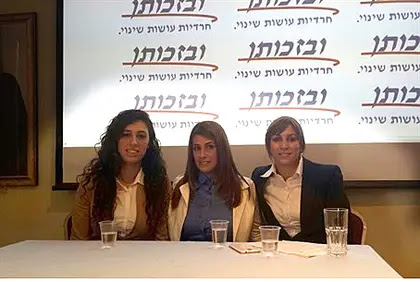 Chareidi women who want to run for political office don't suit the full definition of "chareidi." It just can't happen. Chareidi is more than just a way of observing Judaism's mitzvot, commandments. It's accepting a certain life-style and customs. It's being part of a strict social inflexible structure, which may be a bit more liberal (with a small "L") at home within the confines of family, but in the public realm there's very little leeway.

I remember watching the press conference a few weeks ago with Arye Deri and Rav Ovadia's very accomplished daughter,  Adina Bar-Shalom, when she announced that although she had been offered all sorts of offers to be in safe spots on Knesset lists, she was sticking with Shas and making do with joining Yaffa Deri on a new "Women's Council."

Therefore, I'm not at all surprised that the public leadership of the women's chareidi party are beginning to feel the pressure of their society against them in offers they can't refuse.

Their families must decide whether they really want the pressure and rejection, because if they do, then they aren't really chareidi, are they?
Posted by Batya at January 21, 2015

Agree. Chareidim lead a certain lifestyle and what these women want to do goes against their mesorah. Just proves no one is immune to the craziness that has engulfed the world, in general.

a, what is the "craziness?" that the women want to be in public life or that their families will now suffer?