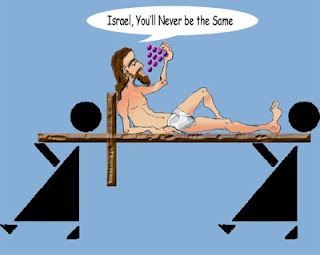 The Israeli Ministry of Tourism was front and center on the floor of the 2011 National Religious Broadcasters (NRB) Convention in Nashville, which took place at the end of February.

In this very extensive and troubling report Jewish Israel covers the dealings Israeli and Jewish leaders have with those personalities who are evangelizing the Jews, and strengthening the messianic Christian presence in Israel.

We also look at the length and depth Israel goes to in order to generate Christian tourism. But business is business, right? You'll be surprised to see who was in attendance and who received awards.

All I can say is that through Israel all the nations will be blessed so it's only natural that Israel will remain of great importance especially for those who love the ONE and ONLY God of Israel. Thank you for sharing your country with us.

Jewish Israel makes it very clear in our report that "gentile tourists are deserving of the finest in services and accommodations, and should enjoy an enriching historical, cultural and overall inspirational experience while here in Israel. And Israel's tourism industry should be encouraged to seek and develop business opportunities in a variety of international sectors and niches. However, it is simply wrong for Israel's Ministry of Tourism to forfeit, diminish or compromise the Jewish nature of Israel in an attempt to expand an ever-growing Christian or multi-cultural market."

While visiting Israel,some things should not be shared with the Jewish people.One of them
is the Christian concept who their lord and savior is.

Ellen, thanks for posting this. I support Jewish Israel, an important site.

Batya,
Thanks,as always, for backing us up on what is not always a popular stand. The truth hurts and the onus is on Jewish leadership and activists to draw proper lines in their relationship with devout Christians.

Shalom, and thanks for the Messiah!
--the Church