Could I Be Deaf? Why Haven't I Heard Condemnation of the PA Terror Police? 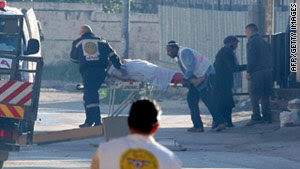 A carload of Jews who had just finished praying at the holy site Kever (Tomb of Joseph) Yosef was shot up by PA Police killing one and wounding others.

OK, now, if these had been  non-Jews in Israel, the international media would be full of condemnation of the perpetrators of the act.  Jews would be blamed.  The United Nations Security Council would go into over-time churning out realms of condemnations and sanctions against Israel.  International leaders, diplomats, self-appointed expert moralists and religious leaders of all stripes would unite against us demanding religious freedom for "all" religions to worship at religious sites.

So, nu, why are the Jewish Israelis who went to Kever Yosef to pray being blamed for not having the right permits and military escorts?  Why should Jews need a military escort?  The only reason that a Jew may possibly need military protection is if there are people who deny them freedom of worship and freedom of movement.  If that's the case, the Jews are victims, so those victimizing them, attacking, shooting at them should be condemned.  Don't blame the victim!

The victim is Ben Yosef Livnat, HaYa"D, the grandson of well-known singer Shulamit Livnat who is also the mother of Minister Limor Livnat. We actually know Shulamit personally. She is a good friend of and has worked for years with former MK Geula Cohen in the Midrasha Leumit, an educational institute which teaches about the Etzel and Lechi in pre-State Israel. My husband had worked with both of them.

Over the years we have attended funerals of quite a number of former fighters. Whenever I think of those funerals, these are the songs I think of: