While the Arab Gazan terrorists have no compunctions about aiming their deadly rockets at Israeli civilians, school buses, homes etc, the world only cares and condemns the insipid Israeli responses.  Well, I call them insipid, because  they're worse than lame jokes.  Under the pathetic leadership of Prime Minister Binyamin Netanyahu and Defense Minister Ehud Barak, Israel wastes valuable weapons trying to hit empty cans and bottles.  When we target the areas from which the Gazan Arabs were launched against our civilian centers and enemy civilians are killed or injured the world condemns us.  But the fault lays totally in the hands of the Arab Gazan terrorist leaders who have turned those neighborhoods into human shields.  Yes, their weapon launching pads are in the middle of neighborhoods. 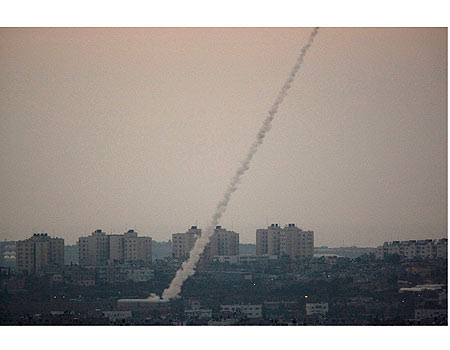 And as you can see, they aren't hidden at all.  All of those people living there know exactly what's going on.

Shalom!
For many years the IDF have been experts at bombing empty fields. Even better than they are at dragging Jews out of their homes.

And they think they're so moral...

You say, "But the fault lays totally in the hands of the Arab Gazan terrorist leaders who have turned those neighborhoods into human shields."

I'm sorry to say, my friend, that WE are to blame, not the hateful Gazans. As long as they see that WE are meek, and WE let them shoot at us, then WE ARE ENCOURAGING them to shoot.

That they care nothing about their kids and innocent people dying - is irrelevant.

Unfortunately, Israel has become a great mimic of America, and in the course of this inculcation of a foreign culture, they also adopted the attitude in America that one more lost life is just another statistic.

It didn't used to be. Back in the 60's, if there was an incursion into Jewish territory, they'd go across the border in a search and destroy mission. Today, they can lob THOUSANDS of missiles, and the best we do is bomb their parking lots in return.

WE are the sissies. You cannot expect anything of THEM to change from their degenerate state. They are animals and will not change. It's up to US to repay them in kind - a thousand fold - for even ONE life.

Poor Shalit is still under their control - and what are we doing - NOTHING!!!!

but for sure, we're in the wrong for trying to play by their rules. America kills large numbers without apologies but demands that Israel be more careful.