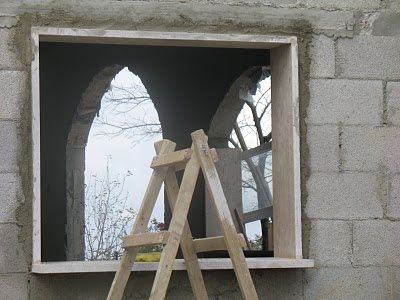 My husband was our representative at the meeting last night here in Shiloh with Israeli Government Minister Yuri Edelstein about the Building Freeze.  Upon his return, I grilled him for information.

This was the official meeting for the region, and people came from all over, not just Shiloh.

I can't imagine how anyone can justify the Jews only ban on building, but as a serious political blogger, I can always use fresh information.  From my husband's report, most people there had little faith in Binyamin Netanyahu's Likud government.

Even I was surprised at the object of Edelstein's blame.  He didn't blame Bibi, nor Barak.  He blamed the Ichud Le'umi, the National Union, claiming that if they had joined the government it would be more Rightist. Duhh, Edelstein seems to have forgotten one little minor detail or more.

First of all, most important, there wasn't any real invitation to join the coalition.  Bibi's goal was a Centrist government, not a Right wing one.  He took on Avigdor Lieberman's Yisrael Beiteinu (Israel's Our Home) to neutralize and marginalize it, but he gave all the real power to extreme Loony Left Ehud Barak and the Labor Party.  He also courted and is still courting Tsippi Livni and her Kadima MK's.

Not to disparage the sincerity and idealism of some of some Likud MK's like newcomer Tzippi Hotobilli and Edelstein, but they have no real power nor influence in the Likud nor in the government.  They are effectively muzzled by being members of the Likud.  They would be much more effective in the opposition, joining the NU and making it larger and stronger.

We need a strong nationalist, right wing opposition to rein in the coalition.  I'm a pragmatist and I can see very clearly that it's not working from inside the Likud.  It can't.  Netanyahu, as Prime Minister, has full control of things, especially of the internal workings of the Likud.  We saw that after the primaries when he went totally antidemocratic and changed the results, pushing Moshe Feiglin and others down to "no chance to get in the Knesset" numbers.  Feiglin hasn't admitted the mistake of his strategy to take over the Likud, but that's not new as far as I'm concerned.  I've written about it before.

Bibi's just following the lead of other Likud Prime Ministers who have gone against Jewish Rights in The Land of Israel.  That's why I'm not a Likud supporter. 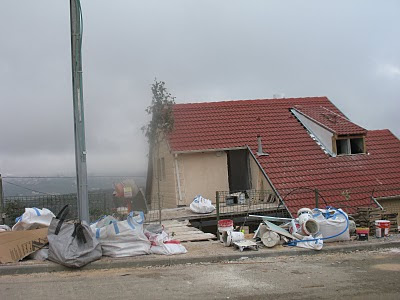 apparently the country is not as right-wing as you might think.

Most people just follow whomever seems most confident and charismatic. It's fluid.

The country leans to the right, but people want to be considered "moderate right" rather than "extreme right" and traditional rather than religious, therefore they will not vote for NU. The only thing that will work is to push the Likud to the right in the primaries while voting for NU in the general elections. When Moshe Feiglin and co. get high enough on the Likud list to have some serious influence, then NU will be invited to be in the coalition. The Jewish Home (NRP by any other name) is the same lukewarm NRP and a waste of time. Its rabbis are the kind of people who caused the hesder rabbis' statement to be so lukewarm. What is needed is some cutting analysis of communications and lots of money in order to influence the media. Eventually the numbers are going to turn in our direction, but it might take another 15-20 years until the kids in school start to vote.

goyish, we dono't have 15-20 years. Feiglin will fail is failing. We must work to make the people understand that undiluted patriotism is best, otherwise they're just loser wimps. Be proud to be a Jewish Israeli.

If you don't have 15-20 years for Manhigut (and it should take less), the rest of us don't have 60 years to wait for Ichud Leumi to amount to anything relevant

If the true loyal antionalists would leave Likud and go to NU, we'd grow quickly, like Yisrael beteinu, Kadima and a slew of other parties.

No thanks. Jewish leadership of the country is Manhigut's goal - not some "what's in it for me" compromising position.

And you're throwing the baby out with the bathwater, wasting the voters and the infrastructure present and available to have it all.

We don't have time time for your plan. I gave examples of speed. We need change urgently. Remember that elections, politics is just a matter of good marketing.

We have less time for yours.

If you don't topple the neighborhood bully, he'll continue to be the king of the hill.

Feiglin's not the one. You're backing the wrong horse.