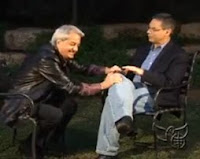 Israel’s Foreign Ministry is sponsoring a bid to upgrade the status of evangelicals in Israel and recognize them as "a sovereign group or an independent church". The Interior Ministry is opposing the move.

Deputy Foreign Minister Daniel Ayalon, who as the outgoing Israeli ambassador to Washington, told Christians that he intended to be “their ambassador to Israel”, seems to be doing everything he can to make good on that pledge.

Hinn, a highly controversial televangelist, provides us Jews with a quintessential view of “avoda zara” and a good reason as to why the Jewish state should avoid granting special status to the evangelical church…more
Posted by Ellen at January 03, 2010

Hinn was born in Israel and knows it well but he isn't a Jew. He's very controversial and spends more money on his 'office' than on helping his followers. He's the TV version of Madoff...

Well, that seems like good reason for the Deputy Foreign Minister to steer clear of him and his television show.

I couldn't think of a more perfect description of this snakeoil salesman if I tried. He's a liar and has claimed his father was the mayor of Jaffa. I don't believe that's true, from what I've read.

Check one of the cult awareness sites for more information. Rick Ross has stuff on him, I believe.

He's also been the subject of an investigation by the US congress in 2009 for financial irregularities.


He's a real snakeoil salesman, not to mention olive oil salesman. His ministry is offering Xtians the opportunity to purchase their own olive tree in an Israeli olive grove. He even claims to ship people bottles of Israeli olive oil.

I don't recall if he's buying it indirectly from either Jews or Arabs or if he actually has purchased land and is growing the trees and procuring the olive oil.


It could also be a total scam to get money out of his followers.

To clarify on the Benny Hinn olive tree scam--this from his website:

"Now you can help take the Gospel of Jesus Christ to the nations by sponsoring the cultivation of a designated olive tree in Israel in the Benny Hinn Ministries Olive Tree Grove. As a charter member of the Benny Hinn Ministries Holy Land Olive Tree Trustee Board, you will receive a bottle of olive oil produced in Israel, a planting location map and certificate, a certificate of enrollment, and a welcome booklet. Become a charter member today with your gift to the ministry.

There should be a disclaimer that the wife is "Evangelical Christian Anne Ayalon".

I read it here.