The War on Terror, The Front Line is Here! 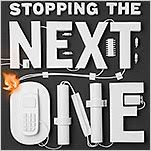 Sometimes, the United States war on terror reminds me of the 1970's British TV comedy "Dad's Army."  Unfortunately we're not on television and we can't just turn off a badly written show.

I really don't have patience for it. The United States isn't in mortal danger.  Even as traumatic as the "9-11" terror attack was, it was localized.  The United States is an enormous country with lots of natural resources and lots of space.  Russian geography defeated Napoleon, and American geography could do the same to its enemies.

I live in Israel, in Shiloh to be precise.  I'm a terror survivor.  I was injured when an Arab terrorist attacked a few dozen of us innocent Israeli civilians when we were waiting at a bus stop.

For some very peculiar (perverse) reason, the world wants us to be friends with them and give the Pseudistinians (Palestinians sic) our Land.  Nobody listens when the Pseudistinians proclaim loud and clear that they want us dead and gone.  They're serious.  This isn't some infantile temper tantrum.

Even worse, the Israeli media, "intellectuals" and politicians have joined the cry:

"Just give them (the Pseudistinians,  Palestinians sic) a state for themselves.  We'll mentor them into responsible government, like the United States in Iraq."

Israel's Prime Minister Binyamin Netanyahu announced that he's in favor of two states for two people in one tiny piece of land.  He won't be able to control the negotiations, the borders, our security.  He's no better than the Left.  As I've said many times before.  You can't be a little bit pregnant.  There's only room for one country here, and that's a Jewish one.  We're not throwing the Arabs out, as long as they obey the laws like any good citizens.  But if they G-d forbid have a country it will be as juden rein as Hitler's dream country.
Posted by Batya at January 17, 2010

"Nobody listens when the Pseudistinians proclaim loud and clear that they want us dead and gone."

Because they want what the Palestinians want:( for the life of me I'll never understand why, though.

Years and years ago had I met a Jew I would have treated him or her like a celebrity. An Israeli Jew? Royalty.

Keli, too bad everyone doesn't think like you do.

I would call them "Pseudostinians" because it makes it more obvious why the prefix is there.

Take a look at this. This is the secular version

This points out the original and the "prequel" which I have also seen published as a "double".

The review is mixed and the second book gets a thumbs down for violence (by the characteridentified as the "mashiach".

By the same author see

http://lukeford.net/blog/?p=1016 an interview with the author

Sabba, thanks for the correction. I'll try to remember.
Interesting

The frontline is everywhere and thanks to Israel, with its lack of koach to defeat an enemy, we all may suffer for it. There is a threat to the West and one day, unfortunately, you will read about it. Terrorist plots are being devised and revised everyday; some get caught and some don't. Don't forget the US is never to big to fall. I don't believe its all smoke and mirrors like the media or you say it is. The major terror groups you have are in our backyard, Canada, and they head to your neck of the woods for more 'inspiration'. We have the largest muslim population in Canada here ... that's why there's a JDL presence,because your 'backyard' can't seem to get 'cleaned' up so, we have to fight,protest, etc. and show you? Why do you think we kept George Galloway out of Canada? Now he's over in mitzrayim causing balagan.

We won't be lulled into 'lulaby' like Israel is with your Fatah and Hamas 'friends', etc. Kol tuv and stay tuned ...

This is more than just Israel's fault. The world terror expert think tank guys don't like to connect the Pseudostinian Palestinian sic Arab terror with the terror in the rest of the world.