Bullet-Proof, The Fashion I'd Rather Not Need Again, And Thoughts About Israel Helping Haiti 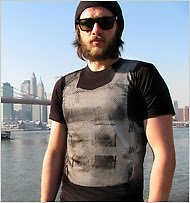 The New York Times Fashion section has an article about trendy bullet-proof clothing.

There was a time when I was forced to wear bullet-proof vests, and there was nothing trendy about them, nothing at all.  Nor were they comfortable.  They were heavy and awkward.

These pictures are nothing like the bullet-proof vests I remember.

When I remember those dangerous days I think of today's Israeli Defense Minister Ehud Barak.  He was Prime Minister.  It was a time of terrorism on our roads.  The Arab terrorists shot at innocent Israeli citizens.  Murder was frequent.  It was a terrible time.

Barak was totally ineffective as a leader.  He was quickly drummed out of office.  In all honesty, I can't understand how the public and the Labor Party have forgotten what went on.

Yes, there is a reason.  Most of the violence was in Jerusalem and YESHA,  Judea, Samaria and Gush Katif (Gaza.)  That made it easy for many Israelis to pretend that it was a local problem and not an attack on the country as a whole.  Whenever there was a terror attack someopleace else, they were outraged:

"Why here?  This isn't the shtachim, territories!

There was no unity, none at all.  The great Israeli chessed,  mercy, charitable acts like what we see in Haiti, didn't manifest itself for fellow Jews, fellow Israelis.  So, I'm of very mixed feelings about all we're doing for the Haitian people.  I'd like to first see Israelis caring for Israelis, and then we can help others.

I search and recently came across your blog and have been reading along. It was wonderful blog.

i dont get it. because jews didnt help other jews 10+ years ago, jews shouldnt help fellow humans today?!
btw, cnn did a very nice job covering the israeli hospitals in haiti.

a, first it wasn't "10+ years ago," and it is worrying that fellow Israelis and Jews care more about non-Jews, foreigners and animals than fellow Jews. I can never forget the complaints by Leftists that Jews dragged from their home in Gush Katif had abandonded their pets. The fact that the Israelis were homeless didn't register. They cared more about the dogs.

And all this talk about the foreign workers' children only knowing one home. Chidren and adults raised all their lives in Gush Katif didn't know any other home either.

Shalom!
Anonymous, try to look at the situation this way: What would you say about an American who ignored the plight of the victims of the Katrina hurricane or the attack on the WTC, and even thought that they deserved it, but rushed off to Haiti to assist the victims of the earthquake on a totally volunteer basis? Doesn't that attitude seem improper to you?

Hadassa, thanks for the input. Perfect comparisan.