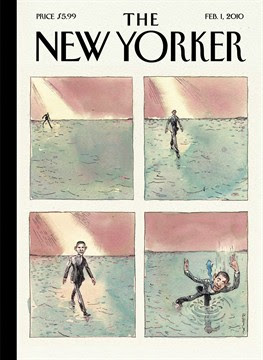 Yes, this is how he's pictured on the cover of the most recent New Yorker Magazine.

As a rule, one shouldn't put too much faith in politicians.  They really aren't all that powerful.  In a democracy, they can't just do what they like, even if all their ideas are great.

A country like the United States has a balance of powers.  There are three parts to the government, the legislature (which in America has two "houses,") the judicial and lastly the executive.  To make any real changes, you need the support of two out of three.

So if an elected president has a really great platform, he can't just declare new laws, he has to mobilize the representatives/legislators to pass his bills.  Close to fifty years ago, when John F. Kennedy was a newly elected United States President, like Obama, he had trouble controlling the legislature to get his bills passed.  If he hadn't been assassinated, who knows if they would have been passed in the early 1960's.  Lyndon B. Johnson succeeded him.  LBJ was an experienced and powerful legislator before being elected Vice President.  The Kennedy team/staff didn't know how to utilize his skills when he was still VP. But when LBJ became U.S. President, he had no problem getting the bills passed.

Jack Kennedy was also young and slickly packaged when he ran for president, but he had more experience and connections than Obama, and yes he too found being president a lot tougher than getting elected.

Now that Obama is sinking, will he learn how to swim?

The Obama worship is frightening.

Even though, I don't like him, I wish to put it all in perspective.

Not sinking fast enough but even faster the more he keeps meddling in Israel's affair .... I believe Hashem will see to that ...

The US doesn't give a hoot about that, but in terms of his American successes, he's the pits. Israel's probablems are due to Israeli mistakes, like looking for foreign approval.