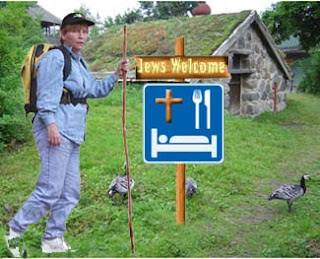 Bed, Breakfast, and Jesus for Israeli Backpackers
According to a recent study conducted by the University of Haifa's Center for Tourism, Pilgrimage and Recreation, some 2000 Israeli backpackers are being hosted annually by missionaries in New Zealand. The Messianic Christian organization HIT (Hosting Israeli Travelers) offers accommodations at a token fee and sometimes free of charge. But there are strings attached…more...

What would have made for brilliant satire turned out to be a real news story. Last week ABC News covered, or rather uncovered secret (or not so secret), new testament “bible codes “ which are embedded in U.S. army rifle scopes produced by the Trijicon company. These scopes are used by the U.S military in Iraq and Afghanistan, and it seems to pose a problem for America which has been trying to downplay any suggestions of a Christian crusade against Islam. The manufacturer has agreed to eliminate the new testament codes. The IDF reportedly also uses the scopes. ...more
Posted by Ellen at January 25, 2010