Bibi's "Pig in the Poke"

Israel's Prime Minister Binyamin Netanyahu speaks of "Peace Talks," as does the media and most Israeli politicians, diplomats etc, but U.S. President Barack Hussein Obama and the rest of the world are very clear and unabashed in saying that the "aim" of the "negotiations" is an Arab Terrorist Pseudistinian AKA Palestinian sic State.

Bibi is buying us a pig in the poke for sure.  There's no peace in the bag; it's terrorism and death for sure.  We had better stop it now.  There's nothing to negotiate.  Obama is making very explicit demands and they endanger the very existence of the State of Israel. 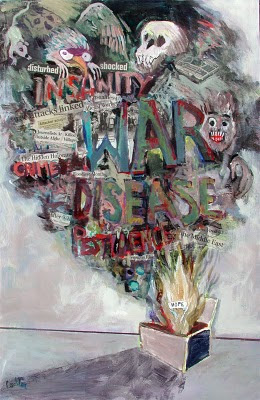 This "peace talks" ruse is a dangerous Pandora's Box.

If only Bibi had half the courage his brother did in fighting terrorists!

You'd think his brother's death would weigh on his mind.

If only his brother survived and became Prime Minister. Perhaps you'd have a stronger PM.

My dear Keli, we know nothing other than the legend. He could have been worse. We'll never know, since he never had the chance. I've been disappointed too many times. Nobody would/could have predicted that Menachem Begin would have given away land and destroyed Jewish communities. After that...

Our "if only comments" do nothing to get into the brains of these treasonous leaders. They are like new brooms- in the beginning they are ok until they are weary and handing over land like cowards. The will of the brave people will reverberate until Hashem sends the true Mashiach, may it be ASAP.

Newsweek has an article this week lamenting that Israelis no longer care about peace. And that's maybe because theer are no troubles now. But that is shortsighted the article argues.

Why many Israelis now believe that pursuing peace with the Palestinians is passé.

....What's changed is that more Israelis than ever also seem to feel little urgency about reaching that goal. This, as much as any reluctance on Netanyahu's part, may pose the greatest obstacle to the Obama administration's efforts to reach a peace agreement before 2012. A combination of factors in recent years—an improved security situation, a feeling that acceptance by Arabs no longer matters much, and a growing disaffection from politics generally—have for many Israelis called into question the basic calculus that has driven the peace process. Instead of pining for peace, they're now asking: who needs it?..

..In short, Israelis are enjoying a peace dividend without a peace agreement. Clearly, that can't last....

..Ask Israelis what they got in return for their offer at Camp David nearly a decade ago to hand over most of the West Bank and they'll point to the second intifada. In Israeli minds, Palestinians should have been grateful for the 2005 withdrawal from Gaza—instead they fired rockets at Israel.

Of course, that version ignores Israel's own provocations and abuses, including the continued expropriation of Palestinian land, the dramatic growth of Jewish settlements in the 1990s and the siege Israel has imposed on Gaza. But it's an account of history that Israelis across the political spectrum accept almost unquestioningly, and it translates into a deep reluctance to push forward too far, too fast..

...Today, hummus in Damascus has lost its appeal... These days, says Ori Nir, the Israeli spokesman in Washington of Americans for Peace Now, Israelis would much rather eat pasta in Rome than hummus in Damascus...

.. Nir told me that Nitzan Horowitz, a Parliament member from the left-wing Meretz party, had sought help from friends recently to set up meetings in Washington. When the friends inquired which American peace groups he'd like to meet, Horowitz said none: he was more interested in seeing environment and gay-rights advocates. Horowitz confirmed the account when I visited him at his office in Israel, where he had a photo on the wall of himself with the Dalai Lama, and a license plate inscribed with the words CHANGE WE CAN BELIEVE IN—OBAMA IN '08....

..It makes sense that Israelis over time would become less obsessed with politics, more cynical about their neighbors, less trusting of their leaders. But for Palestinians next door, nothing is normal. Hamas has rebounded from the Gaza war and is once again smuggling in weapons. In the West Bank, Israel's one reliable peace partner, Palestinian President Mahmoud Abbas, has vowed to resign. Farther off, a conflict with Iran looms. Many Israelis know it's just a matter of time before another bomb blows up in Tel Aviv or Jerusalem. But as one Israeli put it to me: the medication has become so effective at relieving the pain, there's little incentive to actually cure the disease.

You could argue that the B'chor os often more intelligent or more knowledgeable.

The obvious flaws in the Newsweek article show the problem with the short sighted, naive, and down right idiotic statements being pushed by the extreme left. For example, "Israel's one reliable peace partner, Palestinian President Mahmoud Abbas" is completely laughable. I doubt that anyone (including Abbas himself) would actually think that that is true.

Israel's one reliable peace partner, Abbas...that is indeed a joke. I wonder how the reporter wrote that with a straight face.


Sometimes the only way to achieve peace is to fight for it when the enemy clearly doesn't want it at all.


Newsweek should compare the peace talks of the Palestinians and Israel versus the IRA and Britian.

The problem is, for some people, a peace agreement is something that is "too big to fail" or they might as well think that. Of course peace cannot come through negotiations.