The Advantages of the Traditional "Ezrat Nashim," Women's Balcony 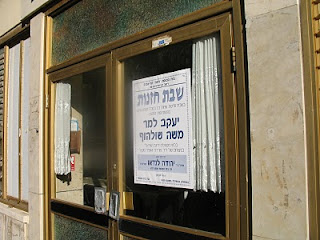 Amazingly, I managed to sit in the perfect birds-eye view seat in the Tel Aviv Ramah Synagogue for the Shabbat Chazzanut.  It was the same seat I had sat in three years ago when we were also privileged guests.  Believe me, there is no better seat.  I'm not one of those women who want to sit with the men.  I like the atmosphere "upstairs."  It's actually quieter and more serious than the men's section.

Many modern synagogues are designed "in the round" like sports stadiums.  I don't see how they can be considered acceptable according to Jewish Law when men and women are staring at each other.  In our two main Shiloh synagogues, my neighborhood one, Ramat Shmuel, and the Mishkan one, modeled after the ancient Tabernacle, we women in the front rows can see the men, but the men can't see us.

Ever since I had my seat changed from the third row by the wall to the middle of the front row, I've felt like a spy.  I can see who's talking, reading things other than the prayerbook, tuned out, wandering and dozing.  When in Tel Aviv on Shabbat, maybe because of the five hour service, instead of the two plus in my shul, I had more time to think about it.

As I spied out the various activities going on I thought of Heshie Fried of Frum Satire.  I could imagine him wishing he could hide out there (in drag?) checking out who else is being entertained by "parsha pages" and books other than siddurim (prayerbooks) and chumashim (Bibles.)


When I first took my seat on Shabbat, I very discretely moved the curtains, ever so slightly, so I could peek without anyone really noticing.  But with time, other women of all ages and backgrounds would sit nearby and other front row seats, and before long, all the curtains were pulled to give maximum view for us.  Even those women who looked rather chareidi, ultra Orthodox, sat enraptured watching the "show" downstairs.

Four teenage girls, who must have had been forced to attend the special occasion by their families, were inappropriately playing with their silenced cellphones.  Yes, that's totally forbidden, but none of us was willing to chastise them.  We all pretended not to see.  We also ignored the fact that quite a number of the special guests weren't really dressed appropriately, but their behaviour was fine.  Yes, this was a Tel Aviv Shabbat.

Up in the balcony, there were no disturbances; there was a wordless camaraderie, despite the differences between us.  You don't get that sitting in the women's side in a synagogue built "in the round."
Posted by Batya at January 11, 2010