When The Dust Settles, What's Next For Haiti?

Quite a number of years ago, there was "a state of emergency" at a family we know.  Somehow, I was out of the loop and didn't help much.  One of my kids was horrified and embarrassed:


"-'s mother is there day and night helping.  I thought you were their friend.  Why aren't you doing the same?"
"Now everyone's fighting for the privilege of helping.  Pretty soon the novelty wear off, and most everyone will be gone.  I was their friend before and I'll be their friend afterwards."


And that's exactly what happened.

Now, Haiti is the country in need.  Everyone's trying to help, but Haiti has some very serious problems which predate the earthquake by more than decades. 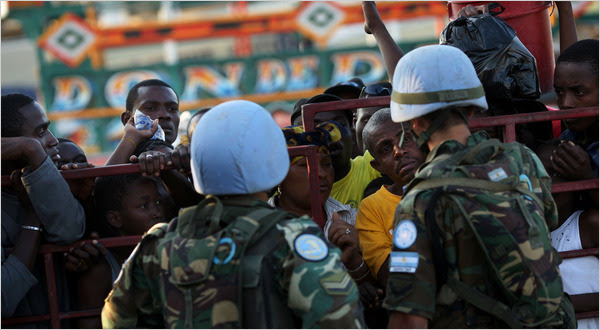 International newscasts are already hinting at local dissatisfaction at American military presence in Haiti.  They don't want Americans policing them.

In Judaism there's a concept that means that you should look for the good intentions.  The American People and the American Government probably have the best of intentions in sending the military to keep order, but the Haitians aren't comforted by the sight of American soldiers on their streets.

When the post-earthquake dust settles, one of the poorest countries in the world will find itself in even worse shape. How will things right themselves?  Do they have any real allies, friends?
Posted by Batya at January 18, 2010

Guess which country sent aid and is being ignored? It does appear that some references were made though.

Praise for Israeli mission in Haiti: 'Only ones operating'

The valiant work of Israel's rescue mission to Haiti has been widely covered in the Israeli press. Now it has earned praise from a surprising source: On Monday, US media broadcast items praising the assistance provided by Israel, and one reporter even sent a letter of thanks to Israeli representatives in New York.

CNN reported that Israel is the only state so far to have sent a field hospital equipped with all that is required for surgical operations. Doctors from various missions send patients requiring surgery to Israel's makeshift hospital, particularly those whose condition is critical, the news network said.

According to the report, other field hospitals contain no more than stretcher beds and medical teams who administer first aid, and they are not prepared for complex surgery

ABC praised the Israeli mission which had assisted a birth using a complicated procedure. The network's reporter, himself a trained doctor, came across a woman on the point of giving birth. First he tried to assist, but when he got into difficulties he remembered the Israeli field hospital, called the Israeli consulate in New York and was directed to the IDF camp.


"I understood that they were looking for the Israeli mission," said Joel Lion, Israeli consulate spokesman. "I called the military attaché in Washington to get the address of the mission… then, via Blackberry, I managed to get the coordinates and direct them there."

When they arrived at the hospital, the young woman was taken in and eight hours later a healthy baby was born.

On Sunday night (17 January) a resident of Port-au-Prince gave birth to a son at the Israeli field hospital. As a token of appreciation and gratitude, his mother decided to name him Israel in honor of the country that helped her. (Photofeed: IDF)

Port-au-Prince, Haiti (CNN) -- Earthquake victims, writhing in pain and grasping at life, watched doctors and nurses walk away from a field hospital Friday night after a Belgian medical team evacuated the area, saying it was concerned about security.

The decision left CNN Chief Medical Correspondent Sanjay Gupta as the only doctor at the hospital to get the patients through the night.
He said the Belgian doctors did not want to leave their patients behind but were ordered out by the United Nations, which sent buses to transport them.

Sandra Pierre, a Haitian who has been helping at the makeshift hospital, said the medical staff took most of the supplies with them.

"Search and rescue must trump security," Honoré said. "I've never seen anything like this before in my life. They need to man up and get back in there."

Honoré drew parallels between the tragedy in New Orleans, Louisiana, and in Port-au-Prince. But even in the chaos of Katrina, he said, he had never seen medical staff walk away.

I forgot to credit the original post that I saw with these.

There are some mentions on international news shows, sort of swallowed at the ends of lists.

The politcal situation in Haiti will deteriorate after the focus is taken off of it and a new disaster or war(maybe in Israel) will take precedence over it.

Last night's news featured more and more troops arriving, violence and frustration in the streets. Will the US and Cuba fight over who's going to control Haiti?