Thursday night, when we attended a "second wedding," not not "second marriage" at Tel Shiloh, we considered it a rather unique event, when an already married couple with kids in their quest for a more Jewish life decides to get married again. 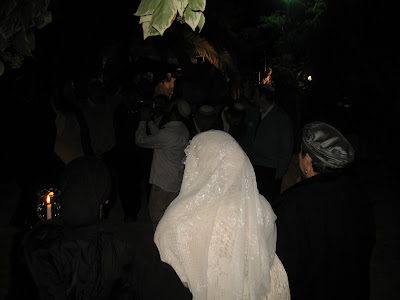 Our Chief Rabbi of Shiloh, HaRav Elchanan Bin Nun conducted the one here in Shiloh.  Tonight I read that Chabad is doing the same sort of thing.

There was a very interesting crowd, as suited the couple, considering their history.  Most of the invitees were either native English or Russian speakers.  Few of the guests grew up in Israel.  The official language of the wedding was Hebrew, because that's the language we all have in common.

The chuppah, Jewish wedding ceremony was outside at the Tourist Center of Tel Shiloh. Afterwards there was a festive meal, a se'udat mitzvah,  a required meal according to Jewish Law.


Mazal Tov to the couple and their children!

Mazal tov to the couple! How beautiful that they decided to renew their wedding vows.

Keli, this is more than a "renewal of vows." First of all, a Jewish wedding isn't a matter of "vows." "Chuppah and Kiddushim," it's the building of a home in Holiness. The couple had been married abroad, a state wedding without religion. Now they are Torah observant and need a Torah Jewish Wedding.

Thanks for the clarification.

Mazel tov! Just to clarify one minor point: Chabad (among others) has done this for years, it's only putting the event on a Telethon that's new AFAIK. It *is* nice to have some good news! Simcha poretz geder! (Joy breaks through all barriers!) Mazel tov!

PS Batya, I'm with you 100% on the settlements. Keep up the good work!

Shifra, thanks for the clarification.