Nachshon Joins up with Shimshon! 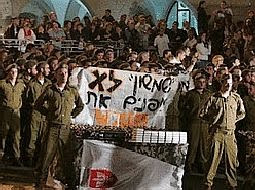 Amazingly, a mere few weeks after their counterparts in the Shimshon Battalion staged a protest at the Kotel [Western Wall, above], two members of the Nachshon Battalion expressed themselves in a similar fashion. And what a name for their unit!

Nachshon [ben Aminadav] was, according to the Book of Exodus, an important figure in the Hebrew's Passage of the Reed Sea which according to the Midrash he initiated – by walking in head-deep until the Sea split. The popular Yiddish saying "to be a Nachshon" means to be an "initiator." 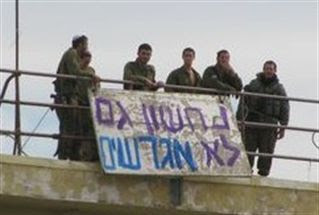 Soldiers Escalate War Against Expulsion
(IsraelNN.com) Combat soldiers in the Nachshon battalion Monday morning raised an anti-expulsion banner on the roof of their base shortly after security forces destroyed two nearby Jewish homes and expelled the families living there.
“Nachshon also does not expel Jews,” read the banner, similar to the Shimshon banner, a protest action at a swearing-in ceremony last month at the Western Wall that resulted in two soldiers being sentenced to 20 days in a military jail and thrown out of combat service.
The unprecedented move by the soldiers in the Shimshon unit was aimed against repeated expulsions at the destroyed site of Homesh, where Jews were expelled by the government four summers ago.
Both battalions are in the Kfir division of the IDF. The Nachshon soldiers unfurled their banner Monday morning at their base in the southern Hevron Hills, less than a few miles from Negohot, where two families were expelled earlier in the morning. Police and soldiers carried out government orders at the community, escalating Civil Lands Administration policy by targeting sites where families have been living in their permanent homes for more than 18 months.
An American donor has provided money to the soldiers' families for each night in jail, and a nationalist group in Israel has promised that a similar gesture would follow for any other soldiers who are punished for refusing to expel Jews from their homes.
***
And let us say "Bravo" to both Battalions! Hashem is the King, and He is with you!
Posted by yitz at November 16, 2009

Let's hope this sends a message to the incompetent souls in charge! You have a cool blog, can we blogroll each other please? Please reply to my e-mail address...

@Nathan: The Muqata is on the blogroll already. :)