This CNN Report about radical Moslems in the United States of America should be an eye-opener for all those involved in public security.  Listen to what the Moslems say about terrorism.


Recent post-attack investigations about Major Nidal Malkik Hasan have revealed that he is a Moslem extremist.  Have all Moslems been painted at terrorists in the American media?

In Israel, one Jew suspected of violence is automatically labeled a terrorist, and the media goes totally hyperactive trying to malign anyone who could possibly be connected by address or background. 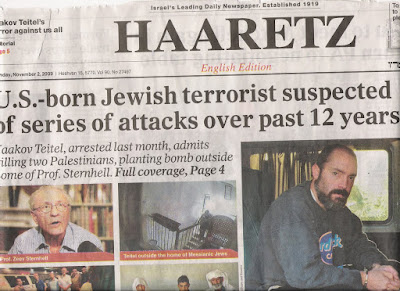 I was amazed that my father, who hasn't been able to comprehend a written menu for years, read, understood and began asking on-target, intelligent questions about this headline.  It was obvious that the extreme Left-wing newspaper Ha'aretz got its message across.

In contrast, how many editorials or op-eds like this have there been in the Israeli press?

Teitel has yet to be tried and convicted, but that hasn't stopped the press from blasting accusations as facts.

In contrast, U.S. Major Hasan's deadly attack in Fort Hood is documented.  For sure Hasan murdered innocent people.  And although he was trained as a medical doctor who pledged to heal the sick, witnesses say that he shot the wounded to increase the number of dead.

Neither case is finished.  I'm not happy comparing them, Teitel and Hasan.  My intention is to compare the government and media reactions.

He is a muslim terrorist. End of story. What will it take for the world to wake up to these sub-humans.