The IPF Is Bad For Israel 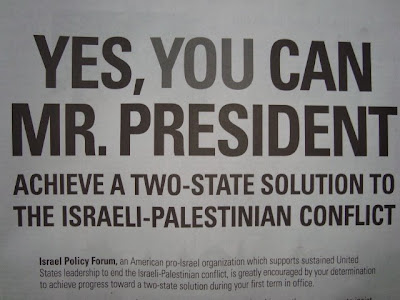 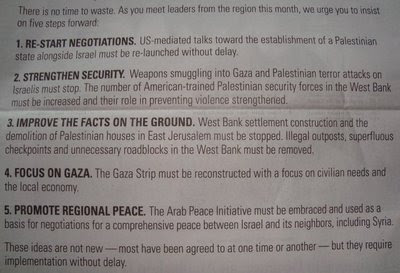 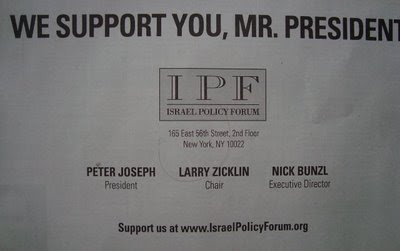 I am writing to express my disgust with your “pro-Israel” organization’s $60,000+ gift to the depleted coffers of the New York Times that I encountered on Page A13 of this morning’s edition.

First of all, I find the omission of any reference to the newly, and democratically, elected Prime Minister of the State of Israel, to be a calculated insult. No, you will point out, this advertisement was intended to address Mr. Obama’s meetings with all “leaders from the region this month.” However, the implication I draw from the ad is that Mr. Obama’s “determination to achieve progress” is based on “implementation without delay” and that Israel shares some of the blame for that situation.

Secondly, I am incredulous that your message ignores the most important threat facing that region: the creation of a nuclear-armed Iran . If you are “pro-Israel,” wouldn't you think to urge Mr. Obama to treat that scenario with the seriousness with which Israel views it?

A few more questions: Why do you accept as fact that the legal demolition of illegally built houses in Jerusalem is an impediment to a resolution of the “Israeli-Palestinian Conflict?” How dare you, a “pro-Israel organization” accept as fact that Israel has created “superfluous checkpoints and unnecessary roadblocks?” What is the basis of that information? A press release from Khaleed Mashall? Why must the Gaza Strip be “reconstructed” if the conditions that led to its destruction have not been ameliorated? Why must the “Arab Peace Initiative” be embraced if there has not yet been clarification that it will include a renunciation of the “Right of Return?”

To me, your statement “We Support You, Mr. President,” is a blanket endorsement of unilateral pressure on the sovereign state of Israel . If you are truly “pro-Israel” then you must know that no government of Israel could long survive if it ignored true gestures leading to peace. It was Menachem Begin who invited Anwar Sadat to Israel and negotiated the most successful peace treaty in Israel ’s history. It was Ariel Sharon who evacuated Gaza . Why do you preemptively insult Prime Minister Netanyahu by stating in a full page ad in the New York Times that the President of the United States has to “insist” on steps that would pressure Israel ? No pressure, whatsoever, would be necessary, if Mr. Obama were able to offer Israel a true peace from its neighbors: recognition as a Jewish State, secure borders, and monetary compensation for all those truly displaced by the U.N. Partition.

If the Israel Policy Forum is in fact “an American pro-Israel organization which supports sustained United States leadership to end the Israeli-Palestinian conflict,” then you will give the duly elected government of Israel the benefit of the doubt and urge Mr. Obama to give Israel the assurances it needs to let down its guard. Nothing else is necessary.

These type of high-profile ads are very disturbing, especially when the organization claims to be "pro-Israel."

You'd be surprised how many fake "pro-Israel" websites I've come across. The names are deceptive and they can be quite sneaking in how they present their real agendas. It's of course all PR meant to spread the myth that most Jews favor a Palestinian terror state.


Sometimes it's really hard to tell about these groups, especially if they use Hebrew names.

(Steven Plaut on A7 has a post today and cites an organization called Gush Shalom. Sounds like it would be very pro-Israel Jewish organization.

The one good thing about this NYT's IPF ad is that it makes clear they're disciples of Obama, which is essentially the same as wearing a sandwich board sign saying, "I'm for the destruction of Israel."

thanks, keli, This organization is certainly more pro-Pseudistinian than pro-Israel.

I would be incredibly surprised if this "pro-Israel" forum is NOT being given thousands (if not millions) of dollars by the European Union or some other pro-Arab organization.

Possibly, but please don't over-estimate the "seichel" of our American bretheren. Remember that they voted for Obama.