Is Anyone Profitting From Swine Flu?

Even though a third Israeli has been confirmed as being sick with "swine flu," Israeli medical authorities aren't worried. It doesn't seem as serious as expected.

According to Ruthie Blum Leibowitz, of the Jerusalem Post, it wasn't all that obvious to the Israeli media how much to hype the virus.

When the first reports of swine flu in Mexico emerged last Saturday, two local colleagues each told me separately that there was no way he was going to lead with that item.
One, in broadcast journalism, pooh-poohed it as "hype" that would dissipate before the week was over, due to its having been blown way out of proportion. "And if there's no Jewish angle," he quipped, "it's of even less interest."
The other, a wire-service editor, pointed to it as a perfect example of the press's penchant for creating - or at least contributing to - panic. "I'm not going to be party to that," he asserted.

The International Herald Tribune didn't ignore it at all. Here are a couple of front pages from this week. 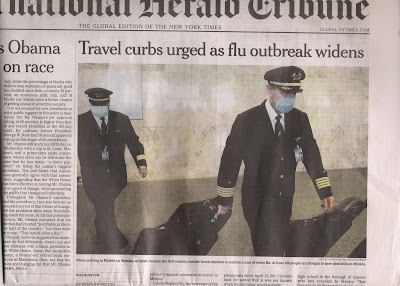 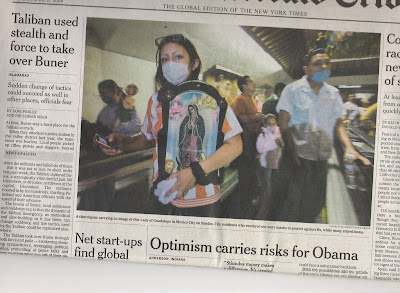 And here's a picture from the Jerusalem Post's site tonight: 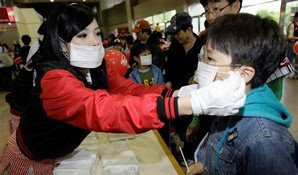 Today at our Shabbat table, swine flu was on the conversation menu, not on the eating menu. Taking account the big picture of world health and all, swine flu is really "small potatoes." Our guest mentioned that many thousands die every year from malaria. The money being pumped into the swine flu vaccine research could do a lot more use and save more lives if used to combat other illnesses.

This little video, I found on Seraphi Secret, puts it in proportion:

We began to wonder who was really benefiting from this panic. Look at the pictures, and you'll see what we think. Which industry?

Apparently,
the people selling the surgical masks are making a quick buck. Free advertising on the streets of Mexico and what used to be a mask for a buck or less now sell for 50 - 100% more. Not a lot of money, but a quick buck nonetheless.

But I think that it really is a legitimate story. It really scares people about being helpless and getting infecting.

Even so. I told my son who is currently in California, to get medical coverage (which I had already been bugging him about) PRONTO. The thing is that we don't know yet what the fatality rate is, and who is most susseptible. We don't need to panic, but its no joke either....

josh, that's a good point about how the masks can become dangerous.

rm, I agree that Americans without coverage are in even bigger danger, and there are many.

The movie is great about putting things in proportion.

I've had flus that hit like this new one. The flu is an amazing virus which keeps changing. G-d willing this will just blow far away.