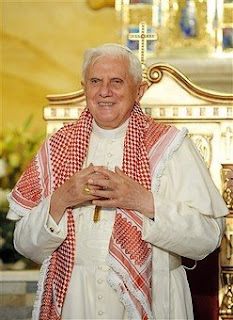 The Roman Catholic Pope is gearing up for his visit to Israel with statements like "Catholics, Jews share inseparable bond."
I admit that I'm neither a history expert nor one in christian theology, but according to the facts I do know, the ongoing relationship between the Roman Catholic Church and the Jewish People can best be described as sado-masochistic. For two thousand years there have been a series of attacks both physical and ideological by the church on Jews as a People, religion and individuals.
The church has been the aggressor and the Jewish People the victim. They've tried everything in their power to wipe us out, like Haman of olde. Now, they're trying sweetness and kindness. And that's the most effective, unfortunately. The Jewish People are so emotionally damaged that too many are susceptible to anybody bringing gifts, even gifts labeled "Trojan Horses."
Posted by Batya at May 10, 2009

'Now, they're trying sweetness and kindness.'

Now ?
It's worked so well with easily beguiled Israel under 8 years of Bill 'Bubba' Clinton and another 8 years under smiling Herr George Bush and of course the smiling Yasser ,his PNA and their peace of the grave Israel has religious signed on to.
What

It seems Israel is it's own worst enemy when it comes to standing for nothing and falling for every smiling Haman who comes their way muttering the word peace under their sulpher laced breath and wide smile.

Time to study,seek the Lord and heed His word ,ALONE ;

And through his policy also he shall cause craft to prosper in his hand; and he shall magnify himself in his heart, and by peace shall destroy many
(That's you ,Israel NOW): he shall also stand up against the Prince of princes; but he shall be broken without hand.
Daniel 8:25

Unfortunately, Israel and the Jewish People are a pushover for a smile. You left out Jimmy Carter.