Sunday, The Seventh Day of Chanukah 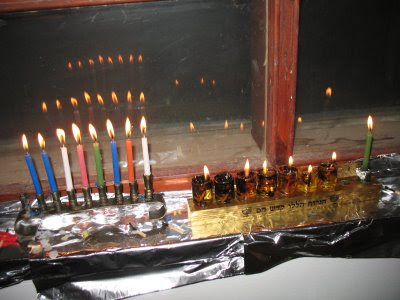 I love the way the lights reflect on our double windows. It's like they go on forever. That's what Chanukah is supposed to teach us, if we listen.
The Macabees fought the Greeks in order to allow establish Jewish independence and freedom to observe Judaism.
The Olmert-Livni-Barak War is to improve their election chances. They have no plans on destroying the enemy, just stopping them for a while:

"Our purpose is to hit Hamas in such a way that will force it to halt any firing and other hostile activities against Israeli citizens and against the IDF," Barak said. "We will do everything it takes to defend our citizens and bring about a significantly improved situation along our border*." (complete article)

Israel isn't safe, as long as Hamas still exists. It's dangerously foolish to think otherwise. They have enough foreign financial backing to restock and rebuild their terror infrastructure. The Olmert-Livni-Barak Troika, is hoping for sufficient calm to triumph in the next elections and continue their alliance. Unfortunately, the Israeli public is notoriously foolish when voting, and this is a democracy, so our troubles may very well continue. And many Israeli voters are so emotionally attached to their political parties, that they would never think of changing allegiance. It's stronger than religion.

And now, mentioning religion, don't forget G-d. Today is Rosh Chodesh Tevet, the first day in the Jewish month of Tevet. As I've been doing for the past year, or more, I'll be going to pray at Tel Shiloh.
Thousands of years ago, when Chana prayed to G-d at Tel Shiloh, she prayed for a leader to take the Jewish People out of their anarchic situation, where everyone "did their own thing." She was convinced that if she had a son with Elkana, that child would be that leader.

G-d agreed and gave her a son, Shmuel, Samuel, who established a Jewish Kingdom and anointed the first two kings, Saul and David.

Today we need a new Samuel who will anoint Moshiach Ben David.