If Bibi Was Really Smart... 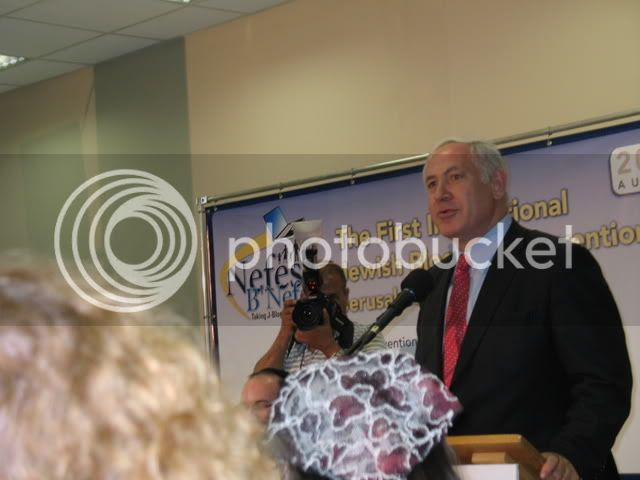 ... Yes if Bibi really wants to win, and win big, he'd stop all his "center" stuff and listen to the people, the עמך amcha.

The people, Jewish Israeli citizens want a government which considers its priority us, Israel and not pleasing American and other foreign leaders.

You can see that in the results of the Likud Primaries. Here's the list according to the Jerusalem Post.

The greatest voter potential for the Likud is from the Right, not the center. If there hadn't been such chaos in the YESHA voting stations, Right wing, pro-Eretz Yisrael candidates whould have done even better.

It's a shanda, a disgrace, that Netanyahu has been so rude to Feiglin. He's forcing many paid up Likud members to vote for a different party in the actual elections.
Posted by Batya at December 09, 2008

Shalom!
Did many people give up and go home from the YESHA voting stations? Voters waited for hours in GavHar, and I didn't hear of anyone going home without voting. I would imagine that after years of practice waiting at roadblocks - or was that a fact of life only in the A (Gush Katif) part of YESHA - YESHA residents would be the ones most likely to stick out the wait and vote, especially because the next election is extremely relevant to them. On a related note, as others have said, it certainly is interesting just how difficult it was for YESHA voters to vote.
Hadassa

I couldn't say how many, but there really were people who tried various kalpies and getting terribly upset and exhausted. The fact that in Shaar Binyamin, instead of calming the voters down, they sent them back on the roads, a half hour to Shiloh, was criminal.

It's hard to understand that Bibi simply does not want to win. He desperately wants to be loved by the media. Remember what they did to him and his wife we he was PM? They even apologized afterwards (after they kicked him out of office in the next elections) for being a bit to vicious.

But no matter how hard a shell you have, the hate in the daily papers sinks through, and Bibi (and his PR people) think they can change that image, nay, they think they need to change it so that the media will like him.

Bibi, quit politics, you're too tired to be a real leader.

I consider the "sensitive, hurt" issue the core of Menachem Begin's turn around, but I didn't really think that Bibi was so bad. He no longer has strong ideological advisors, like the late David Bar Ilan.
If I had considered Likud a distant option after the primary results, I don't now, and he has stated that he doesn't want my vote. I've been a Likud member longer than it was called Likud.