The Likud didn't want people voting in the primaries. It's obvious. For sure they didn't want paid members who live in areas with Feiglin supporters to vote. 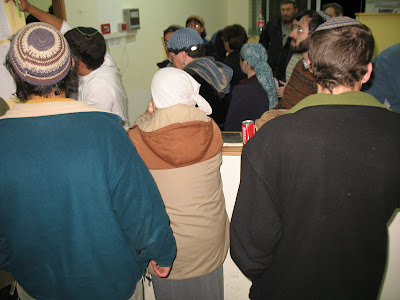 Look at the crowds. We, in Shiloh were lucky. We live here. It was the regional voting station for an area that includes not only the "Shiloh block" of Shiloh, Eli, Maale Levona and the hilltops. There wasn't a polling station in Ofra, or Tapuach or Kochav Hashachar, well to the southeast of us. 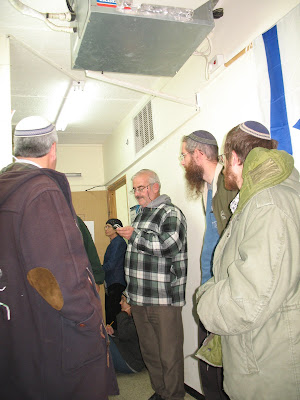 People I know from all those places came here to vote. 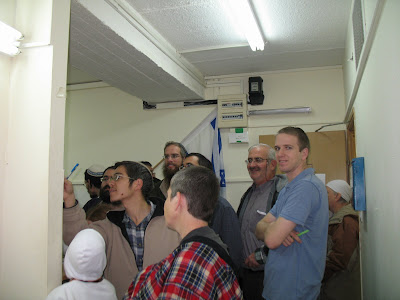 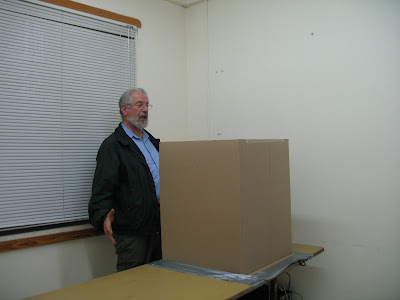 ... there was only one computer.
People waited for hours to vote, no exaggeration. To make a bad situation worse, many weren't fully prepared with their lists of numbers. There weren't any names, just 250 numbers on the screen, like those memory games. "Click two and see if the same picture shows on both." The voting station staff said that I voted the quickest. Of course, they don't have any idea how long it took me to decide whom to vote for. I consulted with all sorts of people. But I did my "prep" on my own time, before I went to vote.
G-d willing the winners will serve the country well, lots better than I fear they will.
Posted by Batya at December 08, 2008

Email ThisBlogThis!Share to TwitterShare to FacebookShare to Pinterest
Labels: Likud

I hate to say it, but I'm glad I didn't go to Shiloh. I decided to brave the Jerusalem Convention Center instead. It took me over an hour.

Someone was carrying around a huge placard with names, numbers and pictures of all of the candidates. Plently of people spoke English and Russian if needed.

Once inside voters were given a quick training on the computer system while they were in the third of four lines we had to stand in.

Each voting booth had a poster with names, numbers, and pictures.

I heard that Ariel was bad, too. Jordan Valley residents either went there, Beth Sha'an, or Jerusalem. That apparently made Ariel extra crowded.

So the fault was the set-up. I was told that there were supposed to be posters, but they hadn't been sent. So I asked why they just didn't print off the lists of names and numbers from the internet and post them in the waiting area, and I got blank stares. It also never occured to those working there to go around to the waiting people and tell them to get prepared before going in. It would have cut the waiting time a lot.
In a sense it was like a carnival. I saw a lot of friends.

Democracy in action. Thanks for reporting the details.

Chaos for sure. I posted a bit more in the a7 version of this post. Apparently, in Beit El, they had the posters up.

The people running the polling stations weren't teachers and didn't know how to get the voters prepared.

Shalom!
And I though that the voting station in Gav HaHar (between Har Bracha and Itamar) was problematic. Apparently in comparison to many other stations it was great. The computers were slow but the staff was helpful and there were printed lists from Feiglin supporters available in addition to the printed posters provided by the Likud. The staffers even prepped us, with printed examples, as to how the computer screen would look and how to verify that we'd voted the way we'd wanted: "After you touch the number on the screen, check the left hand column to see the name, etc." The woman in front of me was politely informed by the staffer registering her that [even though she lived in the area] she wasn't registered as living in YESHA so she should check to see which regional representative she should vote for BEFORE she goes into the booth. Two ad hoc sign up sheets were taped to the door and names were called off so that people didn't have to wait for hours in line. Even though I went in with a list apparently I was a bit slower than the native Israelis so when I was almost done a staffer asked me, nicely I should add, if I needed any help. I didn't hear any complaints the entire time we were at the station, despite the lengthy wait.
One neighbor said that he saw the line at the Jerusalem Convention Center and decided that surely (ha,ha) the line in Gav HaHar would be shorter. It was about the same.
I'm sorry that Shiloh so disorganized.
P.S. The station was next to a kiosk. We sure gave our neighbors (the manager is from Elon Moreh) good business that night.
Hadassa

Shalom!
One question: Does anyone know if fewer people voted this time because of the chaos?
Hadassa

Hadassa, for sure some people never got to vote. Can you imagine having to travel the roads between Shaar Binyamin, Beit El, Ofra, Shiloh, Eli and Kochav Hashachar wondering what to do?

I wonder if the people in charge of the Shiloh kalpi were at fault for not getting their training and knowing what equipment they needed. We only had one computer which was rediculous. As a "former" teacher I know how I would have run it, and it would have cut down on the waste enormously.

it'll be interesting to see how many actually vote Likud in february at the same polling stations, or where you setting an agenda for a party you don't actually support?

Paying dues allows one to vote in the primaries, but we're not required to actually vote for them in Knesset elections. I haven't voted Likud in over 30 years.

Shalom!
Batya, on every election day volunteers from every political party drive voters to polling stations. Feiglin supporters should have done so on the day of the Primaries. This is likely to happen again so we should know for the future that anyone driving a car to a voting station should not leave with an empty seat without verifying with neighbors that everyone who needs a ride, has a ride.
Shiloh had only one computer?! Who decided that? Gav HaHar had two.

Asher, when the Likud deserves our vote, it gets our vote. In general we're doing our part to ensure that the best people for ALL of Israel are in the highest spots possible on the Likud list.
Hadassa

Hadasssa, I was out all day, and didn't get involved until I arrived. The people who organized the Shiloh kalpi didn't do their job, that's for sure.