A Drop In The Bucket

Yes, this morning, if you can see from the photos, it's raining. It's also very windy, and I didn't feel like opening the door to take pictures. And, no, I didn't place the pail outside as a prop. 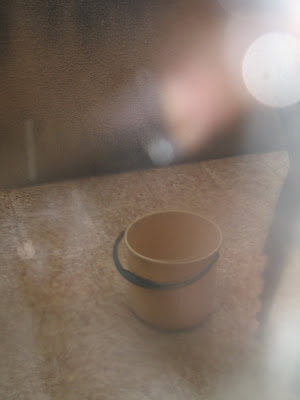 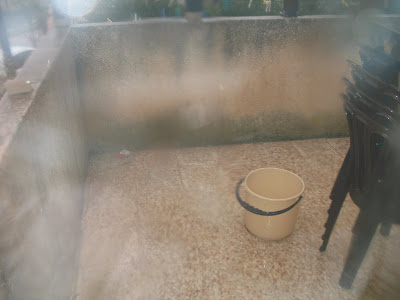 Now, just because there's some rain today, it doesn't mean that our drought is over. This year's rainfall is less than half an "average" year, and that's not enough for our water usage. Note that I used the term "usage," and not "needs."
Just as loony and disengaged from reality as Israeli politics and security policies are, is the the government's attitude towards water and conservation.

That's just the tip of the iceberg, as the saying goes. That's from the scientific end, for those who don't see our water problem, the lack of rain, as a sign of a spiritual drought.

Certain Torah, Bible, passages and Chazal, our sages, make it clear that G-d controls the rainfall here in the HolyLand. And the quantity of rain that falls is dependent on how we well observe the Commandments.

It is clear that we, as a nation, are failing. Instead of G-d sending rain from the skies, the Arab terrorists are launching rockets to kill and destroy us.

We should be praying to G-d and following His commandments rather than running to the US and UN for assistance.

People of Israel, Trust in G-d!

May we have an enlightened Chanukah

I was shocked when I saw someone using a pressure cleaner the last time I was in Israel - for a seemingly pointless purpose, and for an extended period of time, no less!

It's part of the sickly, suicidal policies by successive Israeli governments.

Don't be depressed. It is Hanukkah. The good guys will win in the end :)

Did sound "depressed?" I feel angry. I know we'll win in the end, whenever that is.

Uh,
the high-pressure water thingies actually save water. Take your average garden hose, turn it on a bit to get some minimal flow, and then block the end with your thumb until you get some 'high-power' action. The same trickle has turned into massive power.

As for car washes, I always wondered why the government banned washing your car with a hose, when I know that I can do a very good job with minimal water. Apparently, the car washes that use 70 litres of water are more efficient than using the hose because they are regulated to recycle their water.


Nonetheless, we are in a major water crisis, but frankly, you would never know about it. Add it to the list of issues that the media is not concentrating on in order not to harm the Kadima image too much. If the Likud were in power, you would for sure hear about how the government is neglecting the water issue.

So except for some minor issue of the south getting bombarded, we have less than two months to feel (thanks to the media) as if everything is fine and dandy.

I can't see how those power washes use less than a bucket and brush and a little "elboe grease."

Kadima will just keep redrawing lines, like a drugged Picasso.