Our family lives at the Nitzan caravilla site, halfway between Ashkelon and Ashdod. NO bomb shelters at this Nitzan or any temporary caravilla site. So when the Red Alert siren sounds of incoming rocket(s) - we quickly lay down on the floor and cover our heads as though in an open field (even one of our dogs initially cooperated as he put his paws over his ears) while others squeeze large families under their dining table, or behind a sofa and yet others simply ignore the warning and sit/walk outside.
"Bomb shelters" are being brought in today. One neighborhood already has. It's comprised of three HUGE sewer pipes put together to create one tube 6 ft high and about 12-15 ft long. in which one can stand and walk. On each end there's a cement block covering most of the opening so one is protected from shrapnel. It's like a hamster's toy - only BIGGER. Actually my Wisconsin elementary school playground had a couple of these. Kids would squeeze inside during school-time recesses to keep warm from the freezing winter temperatures.
In our cul-de-sac today there was a conversation calmly discussing where to put the concrete sewage pipes in our parking lot. People don't seem to be panicking (I translate and paraphrase):

Not in front of my house. It will destroy our breeze and view
I have a measuring tape – here- take an end
Put it in front of my house
No put it over there- it's more in the middle
The government will get us all inside these and seal them closed
We've been expelled from our houses, in these caravillas, and now we're supposed to go into sewers? What's happening to us?
Does anybody know if these are used?
Have you guys seen the other neighborhood where kids are drawing on them? We should have a contest
You know we'll have to sleep in street clothes
A neighbor sent their pre-teen daughter to request the sewage pipes be put by her house –they can't make it in 30 seconds otherwise. And so went the conversation.
Several hours later three HUGE sewer pipes were trucked into our neighborhood. One of the neighbors made it clear to the army officer in charge that they wanted the pipes placed somewhere other than immediately in front of their caravilla. A compromise was reached with the sewage pipes placed a further distance in front of their caravilla. After all, we wouldn't want the sewage pipes to dislodge, roll, and smash into a caravilla. 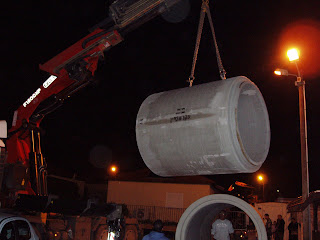 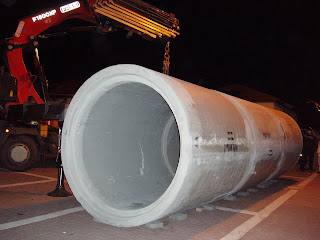 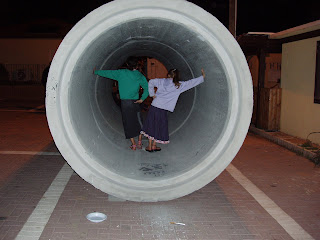 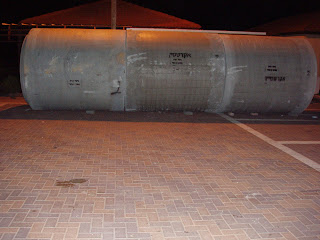 Postscript: The siren sounded just a short while ago in the late evening hours. My husband, on the computer wearing earphones, hadn't heard. Suddenly he noticed me and the girls lying on the floor with our hands protecting our heads. "What are you doing? I didn't hear a siren - outside to the sewers" said he. We had totally forgotten and made haste. Only four other neighborhood families joined us. We were about to return to our caravillas when we felt another BOOM though heard no siren. Methinks from now on we'll sleep in our street clothes with a warm jacket in easy reach.
"Even miles away you can be a part of us and together we will write a new page in the history of e Jewish people and the Land of Israel," Katif Fund http://www.katifund.org/

Oh wow. Well I can see the government really cares about the people it brutally ripped from their homes in the interest of peace. This is their idea of a safe place? For how many people? For how many hours? Bathrooms? A place to lie down? Or is dignity too much to request?

Whenever they ask if we're scared in Sderot, I say that finally the army is doing something. What I'm scared about is the welfare of my friends, evacuees from Gaza, living in cardboard and plaster homes. Please be strong and take care of yourselves!

This is informative and well written. Stay Safe!
Debbie, CA

Sara.... I pray for the safety of you, your family and all of those in Gush Katif. Be safe, my childhood friend. Betsy, WI

Sara Layah, UMV'SH
You, the families from Gush Katif, are heroes who will be remembered by the Jewish People along with all our other heroes over the past millenia. For over a quarter of a century, Gush Katif was a protective buffer zone which is only appreciated by the wider public now that Southern Israel has suffered from its absence. Your pioneering insect free agricultural techniques are a blessing to all those who appreciate these vegetables.
May your names be blessed, and may you and your children and children's children for all time build beautiful homes which continue our timeless traditions.