I don't try to get into the Arab terrorist head and fantasize about what he/she is thinking or would do if Israel would just... I consider that very dangerous, because their culture, values etc are different. How many Israeli Jews, or Jews any place have been suicide bombers? Has there ever been a case of parents Jewish celebrating their child's death, because it included the death of enemies?

Was the United States taken to the World Court, or the court of the international media, for killing thousands of Iraqi innocent civilians in order to capture Saddam Hussein and give him a fair trial?

How many United Nations sessions and resolutions have there been against Syria for murdering its own civilians with chemical or even conventional weapons?

Why are all these Reuters headlines constructed to give the impression that Israel is the initiator of the violence here?

ADD TO MY WIRE 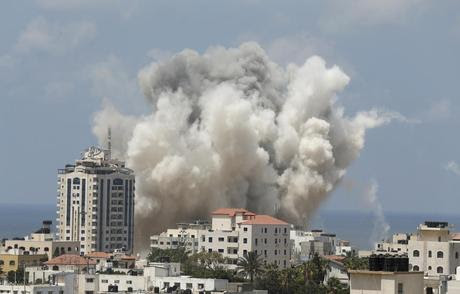 GAZA/JERUSALEM - An Israeli air strike killed a Palestinian man and wounded seven others on Sunday, medics said, in a third day of renewed fighting that has jeopardized international efforts to achieve a lasting ceasefire in a more than month-old Gaza conflict. | Video
CONTINUE READING

TEL AVIV Israel - More than 150 Israelis protested in Tel Aviv on Saturday against a Gaza war entering its second month, in defiance of a police ban on the assembly that cited military restrictions on public gatherings in cities within range of rocket fire.
World, 6:37pm EDT

GAZA/JERUSALEM - Israel launched air strikes across the Gaza Strip on Friday in response to Palestinian rockets after Egyptian-mediated talks failed to extend a 72-hour truce in a month-old war. | Video

Simple! The world does hate us! I say this as a pragmatist!!

Last week I went with my cousins to Yad Veshem, and one of the exhibits tried to explain some logical reasons for the antisemitism related to Nazism. It gave a history of Christian opposition to Judaism. Of course it seemed to leave out the basic reason, which is a reason that Islam also promotes the destruction of Judaism. Both of those religions are based on the premise that they are replacements for Judaism.

That's why Christians call their bible the "New Testament."  The "christ-killer" concept is minor to the theological aim of Christianity which is to replace us as the Chosen People. They are understandably upset at the rise of the Jewish State, our military victories and continued existance which shows that G-d loves us.

Christians should look more carefully at the history of Islam to see that Muslims are no friendlier nor more tolerant of them. The birthrate, demographics in Europe show that in the 21st century Muslims are invading Europe to take over in a very effective way. They have moved in and are having babies, while Christians aren't reproducing.

I hope and pray that the Israeli government will stop listening to all the foreign "advice," threats and warnings. We must destroy the terrorist structure and morale in Gaza and in the rest of the Land of Israel. It's "yin and yang." We must take over, because they won't live with us in peace no matter what piece of paper is signed.

Exactly. I remember someone saying that when they visited or passed through some of the Scandinavian cities they were questioned if they were bringing a class on a field trip. They were astounded when the Jewish couple told them, "No, these are all of our children."
The response by the Citizen was shock that anyone would have "so many" children and that we don't want this many children and that it's better to have one etc...
I wonder what this person thinks now that her country is overrun by violent thugs who want to behead them and are populating at a rate of 14 children per family in some case (more even).....

>> Why are all these Reuters headlines constructed to give the impression that Israel is the initiator of the violence here?

Because they only care about things when Israel does something in Gaza. (partially because almost nothing Hamas does seems to have any effect - but they are attriting "Iron Dome" anti-missiles.)

A while ago you had a post about how to counteract propaganda at U.S. (or other) colleges.

1) The first point that has to be made is that Hamas started it:

Let no moderator or anybody dismiss this as unimportant and get you off this point. It is, in fact, the most important thing to say. This is because no matter what else you might think, you won't blame Israel and you won't justify Hamas if Hamas started it.

For this reason, you can expect to get a big argument from Hamas supporters on this point. This argument must be joined, and not let go of.

2) The second point that must be made is that no Palestinian has the power to offer any kind of final agreement. They are controlled, or limited, by outside powers - who always tell any mediators to talk to the Palestinians. (this is not something said by the Israeli government, but it is true.)

Abbas has openly said that he can't do anything that goes against what the Arab League says.

So that means they must be brought in, and they must be the ones you negotiate with, or they give explicit permission to the PA to agree to anything. (this is all besides the problem of an agreement being undermined by others. This is why Netanyahu insists, rightly, that a Palestinians state be demilitarized. In truth no warm peace, and no cold peace is possible, but only a full-fledged military and political alliance, with Israel in the dominant position. This is not an opinion, it is a fact, and facts are stubborn things, and they won't go away. This is because of the political situation in the Arab world.)


3) There are many accusations against Israel. You don't know the answer to all of them, and you shouldn't be expected to know.

Sometimes, in the final analysis, something is wrong, or a mistake, or definitely not the ideal approach,

But this is irrelevant to the bigger questions.

4) You can however, have a long list of pro-Palestinian or pro-Hamas lies, treachery, or misinformation, and someone engaging in such debates maybe should familize himself with a dozen or two examples of that.

5) By the way, don't don't mae peace wioth your enemies. You make peace with people who are no longer your enemies. The decision not to be an enemy must be first and foremost and pretty much unconditional. Then you can try to work out the details.