Here We Go Again, and This Time Against a More Energized Hamas

It's late at night and I've had a long day. I just checked the news and can't say I'm surprised by this Arutz 7 headline: 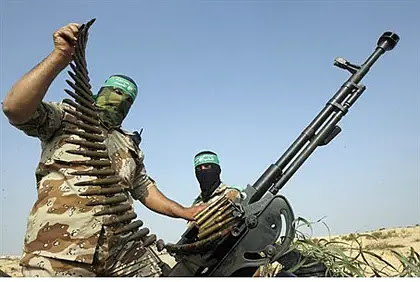 Terrorists from Hamas' Ezzedine al-Qassam Brigades in Gaza
Flash 90
A spokesman for Hamas's "military wing", the Ezzedine al-Qassam Brigades, warned Thursday of renewed fighting with Israel if talks in Cairo to extend a 72-truce in Gaza collapsed.
"We appeal to the Palestinian delegation to not accept a ceasefire, unless it satisfies the demands of our people," a spokesman using the nom-de-guerre Abu Obeida said in a televised address, adding that Hamasfighters were "ready to return to battle."
The three-day truce ending four weeks of bloodshed between Israel and Hamas is due to end at 0500 GMT Friday.
The sides have so far failed to negotiate an agreement to extend the truce, with the Palestinians accusing Israel of "procrastinating". But Israel has insisted it will not give up on its key demand for the demilitarization of Gaza in order to end any future threats against the Jewish state. continue...

This announcement is miraculous! Because we ended the war prematurely, G-d now makes sure we fight onward until we finish off the enemy. The enemy became His mouthpiece. It's the same sort of miracle where Israel once willed away to Arafat, or whomever, 97% of what they wanted, but the enemy screamed, "No - not enough!", and, thanks to Hashem, we still own the Yehuda & Shomron.

I heard a phenomenal shiur from rabbi Wallerstein, shlita. He spoke on Tisha B'Av. He spoke about a particular type of cry that is needed to bring the geulah. Others speak about the need to do teshuvah while others speak of the need to have emuna. I think we need to work on how we engage in our personal relationships etc..
Wither way? I think all of these areas need addressing and we better make a move on it quickly because like the essence of birth pangs at the 10th centimeter dilation: There are not too many moments in between the next one. It appears that this is the case if Heaven forbid they bring out another arsenal! Who are we dealing with? Pere adom...
Hashem please bring the geulah now! Please!

Van, Leah, G-d willing we will do what we are supposed to do in all ways.