I'm going to be honest, no surprise, and tell you that I just don't think that Israel won this war or this round of the ongoing war between us and the Gazan Arab terrorists who have been terrorizing Israel and Israelis for well over a decade.

It's rather peculiar for me to be agreeing with Hamas:

Special to WorldTribune.comTEL AVIV — Israeli infantry and armored units have been withdrawing from the Gaza Strip amid plans to suspend the offensive against Hamas and its Palestinian militia allies.
The Israeli military said it was close to demolishing all of Hamas’ weapons tunnels, including those that penetrate Israel. 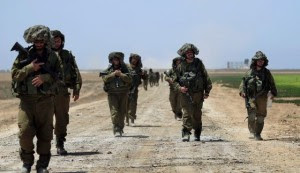 Israeli reserve soldiers return to Israel on July 30 after fighting in the Gaza Strip. /AP
“Our understanding is that our objectives, most importantly the destruction of the tunnels, are close to completion,” military spokesman Lt. Col. Peter Lerner said.
The withdrawal came amid U.S. pressure for an immediate and unilateral ceasefire by Israel. During the 25-day campaign, at least five Israeli ceasefires were violated by Hamas in which nearly a dozen soldiers were killed and another abducted.
“It has failed to achieve any of its goals and would be a clear defeat for the occupation army and for its leaders,” the Hamas bloc in the Palestinian Legislative Council said. “Gaza resisted, endured and will achieve victory.”

The State of Israel isn't willing to take over Gaza. We keep on doing "maintenance work" to make life livable for Israelis in the south. There are now going to be more shelters, protected rooms etc. This is the real-life version of the joke I've blogged before:


For years Israeli governments have been enacting the punchline of the old joke about how various nations react to the news that G-d will be flooding the world again, in "two months." While the other nations try to figure out how to send maximum numbers of people out in spaceships and the like the Israeli says:
"Now we have two months to learn how to live underwater."

It's no longer funny. It's very depressing.

Just a few days ago, the media here was full of interviews and quips by soldiers saying how determined they are to finish the job. Now, we see the soldiers happy to get home. Commentators remind us to turn on the hot water boiler, so there will be enough water for good baths and long showers.

The media just can't control what the various mayors and others who will have to take responsibility down south are saying. They're not buying it. They know that many residents are house-hunting in safer places.

Netanyahu does not want to take over Gaza - but he never did.

He also said the war isn't over.

Hamas positions and personnel are subject to attack by air. That is, there is no formal truce. It was actually like that before all this started, but this time preparations will be subject to attack without the need for the firing of any rockets. And it will not be safe for the high ranking Hamas members to leave their bunker under the Shifa Hospital.

The blockade remains. Israel will be really stubborn on this. Hamas and company don't realize it yet.

The condition, at least right now, for lifting it, is the removal of the rockets.

Also some kind of "guarantee" that construction of new tunnels won't happen.

Livni wants the Palestinian Authority to be in charge of the border crossing in Rafah -something it most likely does not want to do, so there are still a lot of delusions going on here.

Sammy, thanks. I think you're more optimistic than I am.
If that's what Livni is saying, it's the Peres-Herzog line, which is no surprise.
http://shilohmusings.blogspot.co.il/2014/07/peres-and-herzog-totally-re-writing.html

I've got tears in my eyes. I'm tired from the fast. Tired of the rocketing and booming of our artillery but mostly, tired of the fact that the gov't once again DIDN'T FINISH THE JOB!! It's just a matter of time before it all starts all over again.The countdown has begun. May Hashem continue to watch over us, because HE is the only One we can rely on!

The saddest thing is that so many soldiers were killed and injured, and they weren't allowed to finish the job. Unfortunately nothing will change until we have a Jewish leader and our unity is around the Torah and not around the army.

Netivotgirl, yes, I know and agree.
a, exactly

Anonymous @22:42 said it all in those two sentences. Israel doesn't move without getting permission - puppets! Until there will be true Jewish leadership in control and acting as a sovereign country, what can you expect?

Now Avigdor Liberman has floated the notion of the United Nations taking over Gaza - perfectly possible if Hamas agrees, but even if Hamas does, it is not clear, to say the least, that the UN would want to do it. The U.S. and some oher nations maybe could force it to.

Netanyahu I think is trying to transform the situation into something similiar to the of Beirut at the end of the 1982 Lebanon War, when the PLO agreed to leave, but he is not clear on exactly what he wants to do.

Shalom!
No-one won because it's not nearly over.

Sammy, the UN isn't a police body. They will leave if there's violence. They don't enforce, just pretend.
Hadassa, if it's not over why have we sent our soldiers home? It's over but not finished.
a, yes, Israel isn't acting like a proud international state.

Sick feeling in my stomach like after eating too much "fake cream."

Sorry, Batya, I have to disagree with you...

I think that unlike the two previous Gaza campaigns, Israel was the clear winner, despite the world's media bias and the criticism from many areas.

The tunnels were destroyed and Hamas may be bragging, but it is isolated and it is in much less of a position to continue the terrorism. Having said that, the fact that Israel is deploying still will allow them to continue to fight if anything resumes.

In the meantime, Israel must stand up to the rest of the world and insist on demilitarization of Hamas (their destruction and/or Israel's return to Gaza may not be achievable at this time), and the signs seem to point to Netanyahu following up (if not, he is in serious trouble).

I may be an optimist, but I am also realistic. We may never be free of this threat until Moshiach comes, so we probably will wind up fighting in Gaza again.

Sheldan, we see from different perspectives. thanks for commenting. I certainly don't expect everyone to agree with me.