Bibi, Bogie and Ganz, The Look of Defeat

None of Prime Minister Binyamin Netanyahu's fancy words and flawless delivery can hide the fact that he, Defense Minister Moshe (Bogie) Ya'alon and COS Benny Gantz have allowed the Gazan Arab Hamas terrorists to defeat us by  Just look at their posture and faces; body language says it all.


Yes, they should be embarrassed.

The Israeli public had given them overwhelming support to defeat the Gazan Hamas Arab terrorists and take over if necessary, and instead instead, like the Biblical Judah's son Onan who refused to have a child with his brother's widow Tamar they withdrew our IDF troops too early to do the job. The Bible tells of that Onan was punished by G-d, killed, for this sin, and no doubt G-d will find a way to effectively punish these failed leaders.

Right now there isn't a Rightist party in the Knesset, but if elections were to be held now, a party like former MK's Arye Eldad and Michael Ben-Ari's Otzma li'Yisrael would do well. Bibi's support has dropped under one third of the population and even fewer feel that we won this war. Poll on IMRA:

Israel is a very small country with a large percentage of the population army veterans or connected to veterans, so you can't con us about war and defense.

In blatant hypocrisy, Netanyahu after preaching to Obama that ISIS and Hamas are two sides of the same coin, recognized Hamas and made an agreement with them. Read Evelyn Gordon's analysis of the connection between the two, ISIS and Hamas: Spot the Differences.

It is hard to see what Israel is getting out of this ceasefire except a stronger enemy the next time Hamas begins attacking us.


“In order to preserve the lives of innocent people and prevent bloodshed, and in accordance with the Egyptian Initiative of 2014 and the Cairo 2012 memorandums of understanding, Egypt has invited the Israeli and Palestinian sides to a comprehensive and mutual ceasefire with the opening of the crossings between the Gaza Strip and Israel to allow a speedy entry of humanitarian aid and relief, reconstruction supplies and fishing permissions from six nautical miles. Indirect negotiations over other topics are to start in a month. As both sides accepted the ceasefire, it shall start at 7pm Cairo time on 26 August 2014." from official MFA statement

Am I imagining it?


Immediate steps: • Hamas and the other terrorist groups in Gaza halt all rocket and mortar fire into Israel.• Israel stops all military action, including air strikes, ground operations and targeted killings.• The Palestinian Authority will lead coordination of the reconstruction effort in Gaza with international donors, including the European Union, Qatar, Turkey and Norway. Saudi Arabia is also likely to be a major donor, with the expectation in Jerusalem being that unlike Qatar, it will take pains to ensure that its funds will not be directed to Hamas, but rather to build up the PA.• Israel is expected to narrow the security buffer – a no-go area for Palestinians that runs along the inside of the Gaza border – reducing it from 300 meters to 100 meters if the truce holds. The move will allow Palestinians more access to farmland close to the border.• Israel will extend the fishing limit off Gaza’s coast from 3 miles to 6 miles, with the possibility of widening it gradually if the truce holds. Ultimately, the Palestinians want to return to a full 12-mile international allowance.• Israel agrees to open the Erez and Kerem Shalom crossings to the supervised transfer of goods, including humanitarian aid and reconstruction equipment, into the Gaza Strip. 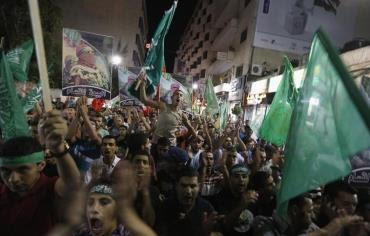 
Honestly, I'm not alone in feeling positively ill about it. Please don't forget that Israel is now being attacked from the north. Anyone who thinks that it's just an unrelated coincidence is crazy.
Posted by Batya at August 28, 2014

make HAMAS = HARMLESS & DISARM is to CUT OFF their ARMS

Go to any canion in Israel and notice how majority of Arab women are covered from head to toe, while so many Jewish women are dressed immodestly to say the least.
That is one underlying cause of position we find ourselves in.
And those gung ho laptop generals who think they can force anyone into submission, well.........NUTS

I felt the same when I saw that front page pic! I don't get depressed, but a very sad feeling overcame me. While they spent so much amunition, it produced a lot of cement rubble. Hamas is still in control.

Anon: you are right on about the immodesty. But some don't believe we should be speaking to the Israeli women about being a bit more modest. Pritzus is abhorred by HaShem, as our Torah tells us.

PS: "Those leftist kibbutzniks living near the Gaza border should apologize to us for having supported the 2005 disengagement, argue settlers." ( Haaretz premium article.) These are many of the "southern" leftist families who were driven out of their homes (as the Gush Katif families were).

Anon @ 10:30 - Don't think it's right to compare with the way they dress to the way the non-religious (mostly youth) dress. That is just one part of the problem: the main problem is that there is a puruposeful agenda of taking out any kind of Jewish education from the public schools where the children of seculars can learn who they are & how to be a Jew. Unless at least some Torah, Jewish history and traditions are taught to those who have been raised with nothing (garbage), how could they know better, with all the ugliness out there in today's world. We should never compare the 'livush shelahem' to Yehudim. We just need 'normal' Judaism where they would at least understand that Elul is the month to do teshuvah.

Moshe, amen
a1, Don't be so quick to criticize others, and don't be so impressed by the long Arab coats. Underneath most of the those women are in tight jeans and bikinis on the mixed beach. Our problem is with the country's leadership and that includes the rabbis, too.

Neshama, your point about the fact that many of the communities now suffering from Arab attacks are the same ones that supported Disengagement. They need to admit their mistake and do teshuva.

a2, teshuva is good at all times. I don't think we have the right to judge others. There are degrees of chessed done by those who don't look very "yirat Shamayim." Only G-d knows. We each have to repent and not throw the blame on others.

There's bad news and good news by the Golan Heights.

The bad news that Jihadists are now on Israel's northern border, replacing the Syrian government at some UN checkpoints on the Golan Heights.

The good news is they are al Qaeda jihadists and their allies supported by Saudi Arabia, and not from ISIS/ISIL/Daesh supported by Qatar and Turkey.

The really big mistake that Netanyahu's government made wa sthey thought it was all pver after 5 day ceasefire, and told people to go back home.

The only mistake now I would say is agreeing to allowing any kind of reconstruction aid at all before arrangements have been worked out.

There is, therefore, a possibility, of tunnel rebuilding, but it would take a months to a year or more for anything significant be rebuilt.

There is not yet a possibility of rocket importation because Egypt will stop it.

A bone has been thrown to Israel with talk of negotiating further, but all this is linked to a possible port or airport, which everyone knows will not happen, and could not happen until after disarmament was complete and political change in Gaza and arrangements made to prevent import.

I think it is posisble Netayahu was afraod a UN resolution would be passed giving terms for a ceasefire, and he thought these terms were better.

The problem for Israel is that reconstruction is supposed to start before anything else is agreed to, and disaramment has bene put on the back burner.

Also, it's clear the war could start again in around a month because this ceasefire has got a 30-day term.

If it is extended then, shortly before Rish Hashonah, for a much shorter period than one month - WATCH IT!