You, we none of us should keep acting like antisemitism ended with the defeat of the Nazis.

It's just minutes to Shabbat and I don't have much time, so I'm just giving you something to think about: 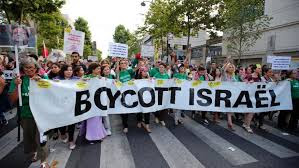 Anti-Semitism and its limitations
Outside the US, throughout the Western world, anti-Semitism is becoming a powerful social and political force. And its power is beginning to have a significant impact on Israel’s relations with other democracies.

Consider South Africa. Following a lopsided vote by the University of Cape Town’s Student Union to boycott Israel, Jewish students fear that their own student union will be barred from operating on campus. Carla Frumer from the South African Jewish Student Union told The Times of Israel, “If they prove we are a Zionist organization and support Israel, they can have us banned and seek to de-register us.”

The first shock was that their children, some as young as five, were terrorized on their school bus.

The second shock was that the bus driver made an unscheduled stop to allow the anti-Semites to board the bus and harass the children.

The third shock was that after catching six of the eight assailants, the police let them out of jail the same evening.

Taken together, the incident revealed an obscene comfort level among Australian authorities with the terrorization of Jewish children. Jewish families cannot assume that their children will be protected by non-Jews, whether they are school bus drivers or the police...

PA TV is broadcasting a new song that calls on Gazans to sacrifice their lives by fighting Israel, in order to create a Palestinian country that will replace Israel from the Jordan to the Mediterranean Sea. The visuals of the clip show continuous Palestinian violence, as well as scenes of funerals of many "Martyrs."
Palestinian Media Watch has documented that PA TV and PA TV live, both official stations of the Palestinian Authority, broadcast many songs presenting a world without Israel and educate Palestinians to anticipate a future without Israel.
This song was first broadcast on July 29 and many times since then.