The following piece written by MK Orit Strook appeared in the last issue of the Hebrew B'Sheva weekly. While this appeared on Thursday and was written prior to that, the idea she refers to (and voices her opinion against) is "still on the table," being in fact advocated by the Yesh Atid party, a prime partner in Netanyahu's present coalition government. And while both Batya and I have been saying this for a while, MK Strook expresses the idea beautifully!
Tranlsation by Yitz of Jerusalem, exclusively for Shiloh Musings. 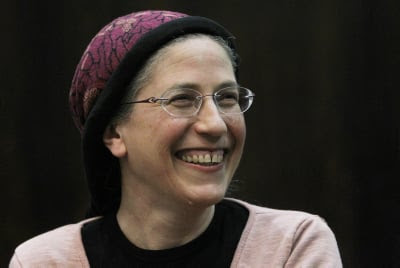 Abbas = Hamas
by MK Orit Strook: The partner who is supposed to supervise the Rafiach crossings pays salaries to terrorists

Just before giving Abbas the keys to the Rafiach (Rafah) crossing, we should stop and contemplate the personality of one who is somehow perceived as a 'responsible adult' in the conflict. In this setting, he is to monitor and verify that no materials or money flow through these crossings to restore the Hamas terror network, for which some of our best boys have given their lives in order to destroy.
What are the real differences between Abbas and Hamas? Just how much does Abbas oppose terrorism against Israel? And how much can we deposit (mafkid), or rather abandon (mafkir), our security in the hands?
The President of the Palestinian Authority is portrayed by many as one who has abandoned terrorism and has chosen only the diplomatic and legitimate path. We should not underestimate the aggressive diplomatic struggle he is waging against us these very days, a struggle aimed at - and succeeding - in tying, to a large extent, the hands of our Army in its war against Hamas terror. But it is important to know that Abu Mazen never abandoned the path of terror, and worse than that: he actually currently funds terror against the citizens of the State of Israel.
This week it was announced that funding for the abduction and murder of three boys - Naftali, Eyal and Gilad - came from Hamas in Gaza. It is equally important to publicize that the salaries for funding the terrorist murderers from the moment of their capture and sentencing by an Israeli court - will not come from Hamas, but from the hands of President Abbas.
This is the bitter truth: Abu Mazen, in his roles as Palestinian Authority Chairman and Chairman of the PLO, transfers large amounts of salaries monthly to terrorists who sit in Israeli prisons, as well as to those released from them. Salaries are distributed according to the laws of the Palestinian Authority, an Authority which was intended (in case you forgot) "to fight terrorism without the Bagatz (Israeli Supreme Court) and without B'Tselem (a radical left-wing organization)." The total payments transferred to terrorists imprisoned in Israel stands at tens of millions of shekels a month. The amount of the payment is determined by the "seniority" of the terrorist, which means according to the severity of the terrorist act committed.
For example, the terrorist Ziyad Ayad received, until his release in the Shalit deal, a salary of NIS 7,000 a month, and over the years continued to receive a salary as a "released prisoner" of NIS 1,400 a month for three years. When he left on the eve of Passover, together with his son, to kill Commander Baruch Mizrachi, leaving five children orphaned, he was sure that he would double the income of his family. And Marwan Kawasma and Aatr Abu Aisha, kidnappers and murderers of Gilad, Naftali and Eyal, knew very well when they planned the heinous murder, that at the end of the road a fat paycheck from Abbas would await them. While the brothers Hakem and Emjad Awad, murderers of the Fogel family Hy"d, knew before the night of slaughter that each one would receive one million and eight hundred thousand shekels after 30 years in prison from Mahmoud Abbas.
Abu Mazen has never informed any terrorist that he would not receive his monthly salary, because he had committed such heinous murders that are too severe for the PA to be rewarding them. On the contrary, the law and the decisions of the government he represents promise that most brutal assassins, which in fact most of them are, will be rewarded.
Therefore, even when Abu Mazen spoke loftily of his opposition to the abduction of boys and their murders, the terrorists and their families knew that with his words one cannot go to the grocery store. With his money however, you can laugh (and sing) all the way to the bank.
With the PA average salary at less than 3,000 shekels a month, Abbas' salaries to terrorists not only provide financial security, legitimacy, and encouragement, but also quite honorable socio-economic status. For example, in the recently-published minutes of a legal proceeding, an accused terrorist from Hebron mentioned that he needed money to get married and build a house. He studied Abu Mazen’s “rate list,” and decided which kind of attack he should perpetrate in order to get the required amount.
By this method, according to the law, by deed and not by statements, our partner funds and encourages murderous Hamas terrorism.
At the end of last month, the PA’s treasury was 22 million shekels short - which is the exact amount of funds to pay the salaries of terrorists. The Israeli government decided, following the abduction, to deduct this amount from the tax money it transfers to the PA. I have no doubt that President Abbas paid the full salaries of the terrorists anyway - at the expense of the health, welfare and other civilian needs of his people who are not part of his privileged club.
If these are the values and priorities of Abu Mazen, how can we entrust him with the keys to Israel's security - the keys to the Rafiach crossing?
Posted by yitz at August 12, 2014