The good, the bad and the ugly update 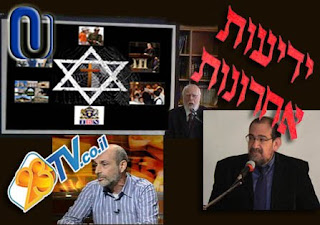 Review: The good, the bad and the ugly:
The Jewish people know that when it comes to fighting the Christian missionary onslaught in Israel, education and public awareness are two very important keys to winning the battle. Unfortunately, evangelical messianic Christians are using the same powerful public relations tools available in Israel - in Hebrew - to confuse and catch Jewish souls. Here's a recent rundown of the good, the bad, and the ugly taking place in lecture halls, in print publications, and on television...more

The Nation of Israel
An intriguing and thoughtful post by Jewish Israel member Jim Long:
"As a Noahide who loves G-d, Torah and the people of Israel, I'm wondering if it isn't time to stop referring to Judaism as a religion...Calling Judaism a religion fails to recognize that the Jews constitute a genuine nation, in every sense of the word... I cannot find any place in the Torah where G-d told Avraham Avinu that He would make him the father of a great religion....more

This piece has also been posted in our forum section. It's generating some interesting discussion. ...
Posted by Ellen at May 04, 2010