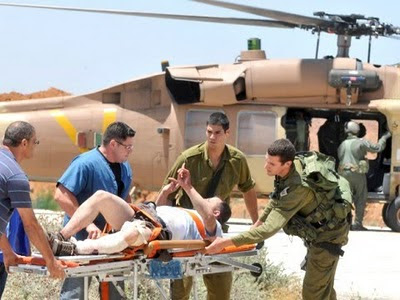 a wounded Israeli soldier from the operation
Soldiers who were present say that for the operation they were not prepared for a violent attack upon the ship. Among the attackers: Sheikh Raed Salah
*


My translation from a Hebrew article on the News One website.

*
Reporters who accompanied the military operation at sea to stop the flotilla say that soldiers were not prepared at all for what occurred on the ship. According to them, they boarded the ship without weapons and with bare hands, equipped only with paint guns.
*
Upon their arrival, they said, they were beaten by the occupants of the boat. "We were attacked with slingshots, metal balls, rods, chairs and scrap. The rope-ladder was tied to an antenna on the ship. They shot at us from the hold of the ship with firearms. They tried to throw us overboard. They tried to kidnap a soldier. It was not a peace flotilla, it was a terrorist flotilla. It was like the lynch in Ramallah."

Combatants testified that amongst the attackers was also Sheikh Raed Salah*. Initially, the order was given to fire stun grenades, and only later was the command to fire live ammunition given.

[*Arab and foreign media had initially reported him dead!]
Posted by yitz at May 31, 2010

Yitz, thanks for the post. The bad prep should have Barak condemned and booted out.

Thanks a lot for the report. I visited the URL.
Keep it up!!

This is Ibrahim from Israeli Uncensored News

Paintball guns, stun grenades and bare fists...Barak should be should be ashamed and removed from his position.

The IDF is better than this. He put them in grave danger, not to mention making them laughing stocks in the eyes of Israel's haters. I've read comments on You Tube. Half the comments are hate and the other half ridicule.

But at the end of the day, the IDF took down 19 terrorists and that makes them heroes in my book.